Tractor rams into the gate of her bungalow, breaks it.

Jail superintendent Usha Raj at her bungalow with the broken gate in Ujjain on Thursday. The tractor is also seen in the picture. | FP PHOTO

Ujjain (Madhya Pradesh): An attempt was made to allegedly crush Usha Raj, the superintendent of Central Jail Bhairavgarh, with a tractor on Thursday evening. The incident occurred when she was returning home from office. In the attempt, the tractor rammed into the gate of the bungalow at high speed, breaking it. Usha Raj has accused some of the jail staff of trying to murder.

†There is a distance of about 200 meters between the jail superintendentís office and her house. She lives in E-type bungalow. This bungalow is at a slight elevation on Bhairavgarh Tiraha. According to the jail superintendent, she was returning home on foot at around 4.10 pm. Meanwhile, two youths driving a blue coloured tractor came behind her. On realising that the tractor was heading towards her, Usha Raj quickened her pace and so did the tractor driver. By then Raj had reached the compound of her house. The tractor hit the bungalow gate with the result that it broke. When the jail guards came out on shouting, the driver and his companion tried to escape, but both were caught and thrashed.

Usha Raj has accused the jail staff of trying to get her murdered. She told that she has made a lot of improvement in the prison system, which has angered a lot of people and they want to get her murdered. Meanwhile, Raj also had a fierce argument with SI SN Prajapati of Bhairavgarh police station. He had come to the bungalow to collect the goods of the tractor driver and his companion. Raj has cited a fair investigation of the entire incident and giving full information to the court and her senior officers.

Tractor driver Narendra Lalji Rawat, resident of Sukmakhedi in Bhitarwar, Gwalior and his partner, Mukesh son of Pritam Pal, resident of Karera in Shivpuri, told that they are working in Tata project near Kshipra river. Their contractorís name is Arvind Rai. They said while they were driving the tractor towards Bhairavgarh an auto-rickshaw came from the front at a high speed. Narendra said that he wanted to steer clear to avoid an accident but as the tractor has a power steering, it entered the jail superintendentís bungalow.

Bhairavgarh TI Praveen Pathak told that the investigation is going on. At present, the tractor driver and his companion have been detained, he said. 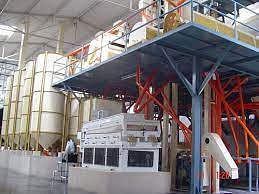