There is a tradition of taking out the Sawari of Shri Mahakaleshwar in the month of Shravan-Bhadav.

The replica of Lord Mahakal riding on silver palanquin returns to the scheduled route after customary abhishek of Mahakal with the water swelling in Kshipra at Ramghat, in Ujjain on Monday. | FP PHOTO
Follow us on

Ujjain (Madhya Pradesh): On the last Monday of the holy month of Shravan, the fourth Sawari of Shri Mahakaleshwar was taken out to give darshan to the devotees in the form of Uma-Mahesh. As it was Ekadashi and last Monday, there was a lot of enthusiasm among the devotees about this Sawari. Devotees queued up on both sides of the road and waited to catch a glimpse of Baba.

There is a tradition of taking out the Sawari of Shri Mahakaleshwar in the month of Shravan-Bhadav. It is believed that from Devshayani Ekadashi, Lord Vishnu hands over the burden of creation to Lord Shiva and goes to the land of Hades. So Lord Shiva comes out on his Sawari to know the well-being of his disciples.

In the month of Shravan-Bhadav, the Sawari is taken out in different forms of Lord Shiva. It starts with Chandramouleshwar Swaroop and in every Sawari the number of face masks grows. After Manmahesh and the Tandava form of Shiva, Lord Mahakaleshwar came out in the form of Uma-Mahesh on the fourth Monday.

The palki (palanquin) left the Sabha Mandapam after the customary worship at 4 pm where it was given the guard of honour right outside the temple. Then the Sawari started with the police band. Devotees were seen waiting for their lord on both sides of the Sawari route.

The Sawari reached Ramghat on the Kshipra coast via traditional routes and the abhishek was performed by the holy waters of river Kshipra. After the worship, the sawari again left for the temple. The palki was welcomed by offering flowers, aarti and worship throughout the way. 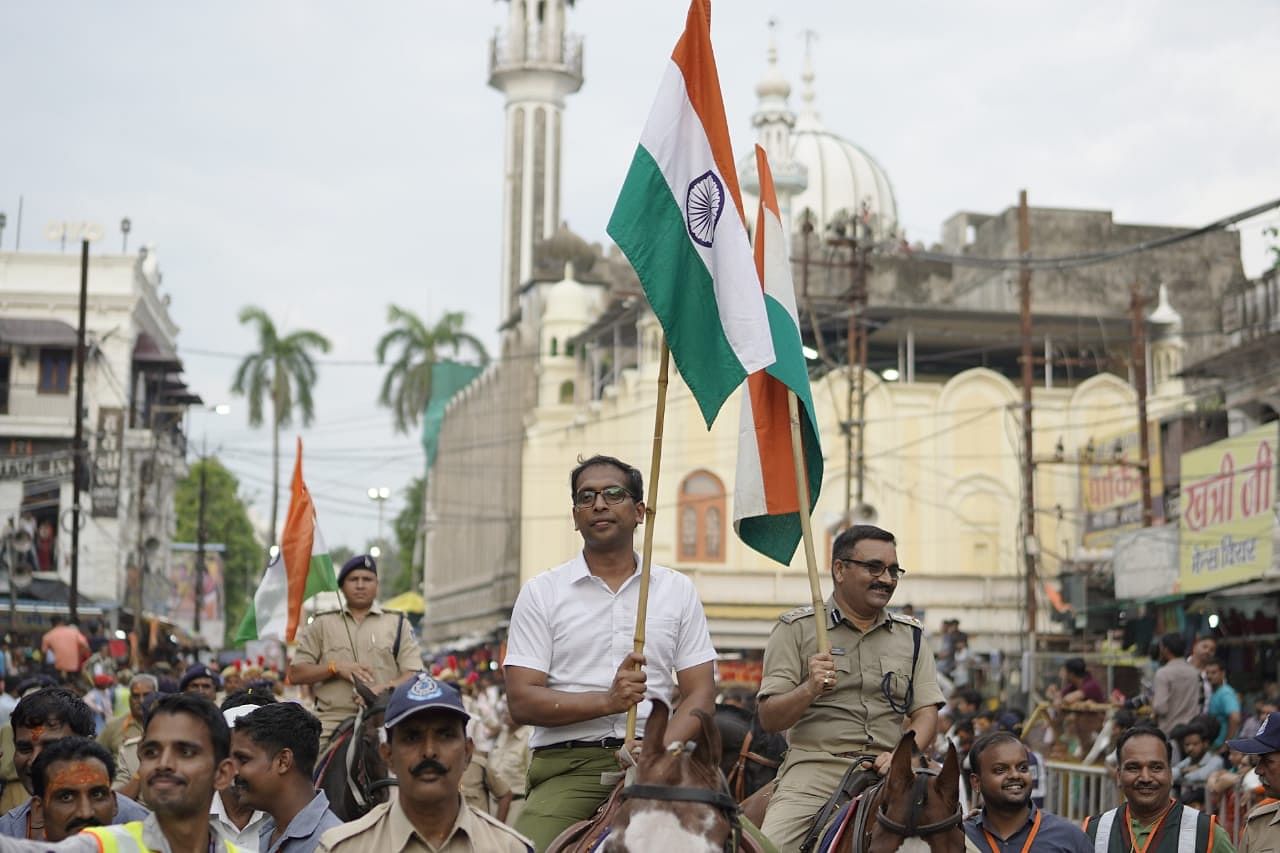 Under “Har Ghar Tiranga Abhiyan” from August 13 to 15, the tri-colour will be hoisted at all houses in the city. In order to increase the participation of the general public in this campaign and to awaken the public consciousness, collector Ashesh Singh and SP Satyendra Kumar Shukla took the national flag in front of the Sawari on horseback in the fourth procession of Mahakaleshwar on Monday. They tried to give a message that every household should participate in the campaign. And every citizen of Ujjain has to participate enthusiastically.