HomeIndoreMadhya Pradesh: Chief Conservator of Forests not satisfied with ongoing probe by DFO

Madhya Pradesh: Chief Conservator of Forests not satisfied with ongoing probe by DFO

The CCF's order came on Monday, the day after statements of the eyewitnesses were recorded by DFO and submitted to CCF.

Indore (Madhya Pradesh): Chief Conservator of Forests (CCF) Indore division is not satisfied with the investigations carried out so far in the dispute between an SDO and forest guard and will record statement once again, said forest officials.

The CCF's order came on Monday, the day after statements of the eyewitnesses were recorded by DFO and submitted to CCF. Some members of the employees' union have already said evidence related to the case has been tampered with.

The employees' union were also not satisfied with the way the investigation was carried out by the DFO and approached the CCF. They demanded that the SDO should be transferred.

On Saturday, there was a dispute between SDO Dinesh Vaskel and forest guard Devendra Tomar over-performing duty at the main gate of the sanctuary.

Immediately after the incident, the Tomar complained to Tejaji Nagar police station that SDO Vaskel had used abusive words against him and also threatened to shoot him.

Tomar gave the names of Sarla Sondia and Vikas Yogi as eyewitnesses to the incident. SDO Vaskel had denied the allegations on Sunday.

DFO Narendra Pandwa launched an investigation on Sunday and recorded statements of the two eyewitnesses. According to sources, on Monday, the DFO shared the result of the preliminary investigation with CCF HS Mohanta.

The CCF did not appear satisfied with the probe so far and indicated that another DFO might be given the task of carrying out the investigation.

According to departmental sources, old complaints related to SDO are also being called. Senior officials in Bhopal have also been informed of the incident and subsequent steps.

CCF HS Mohanta said, “Many points were missing in the investigations related to the dispute, and we have also called for details of previous complaints against the SDO.

The officials pointed out that both Sarla Sondia and Vikas Yogi who are eyewitnesses to the case also work under the SDO so it won't be possible for them to speak out against him, therefore for the sake of impartial investigation, the SDO should be transferred to another place till the investigation goes on. 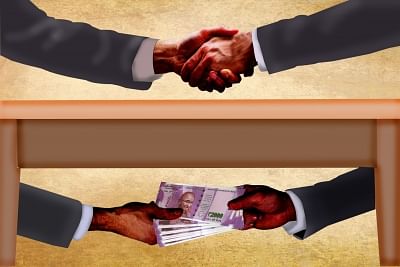