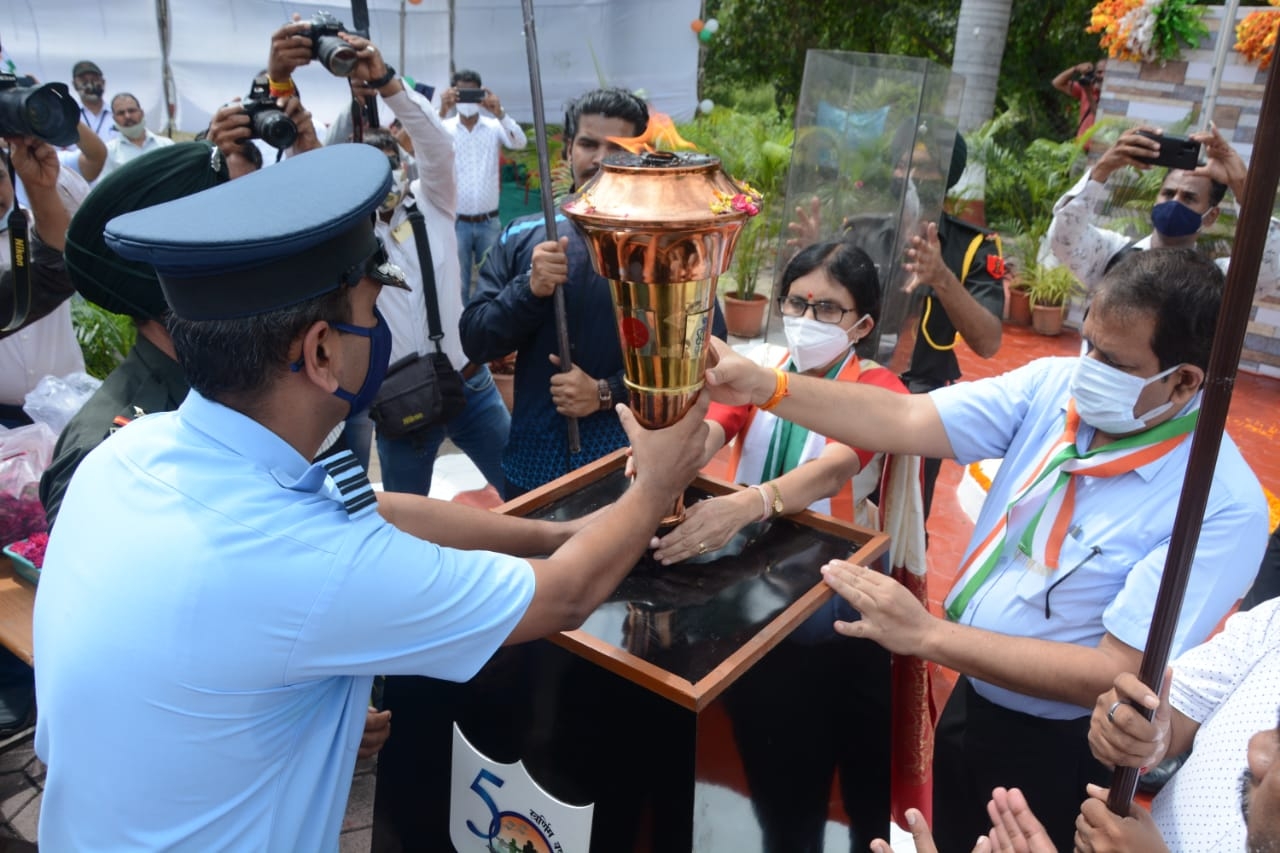 ​​Even ​as 'Swarnim Vijay Mashaal', commemorating 50 years of India's victory over Pakistan, was brought to Devi Ahilya Vishwavidyalaya (DAVV)​, the heroes of 1971 war between India and Pakistan shared anecdotes with teachers, students and eminent persons of the city​ at the function organised to mark the occasion.​

​The victory flame reached UTD campus with much fanfare in form of a rally. A grand function was organised in university auditorium where the flame was displayed.

Recalling the surrender by Pakistan Army, Air Marshal (Retd) Harish Harish Masand said the then IAF Air Marshal Hari Chand Dewan had asked the ​then Pakistan Lt General AAK Niazi why they ​gave up in just 13 days of war even when they had more than 90,000 soldiers in East Pakistan to fight​ with​.

“Niazi ​had ​pointed out at the wing on uniform of an IAF officer ​and said they gave up because of that. Niazi said that Pakistan soldiers were hiding in​ jungles and other hideouts during war but Indian Air Force was not sparing us anywhere,” he recalled.

Masand said that they knew something big is going to happen when Pakistan army had started operation search light in East Pakistan and migrants from there had started coming to India telling terrifying stories.

“Pakistan air force launched attacked on 11 of our airports in Western parts of India on December 4. The very next day we started attack on airports in East Pakistan. Within a few days, we destroyed all​ their ​airports. On December 15, when we attacked governor​'s​ house in Dhaka, the then governor Abdul Motaleb Malik reportedly hid ​under a table and wrote ​his resignation from there itself,” said Masand, who ​shot down a Pakistani jet during the war.

Masand, who was just 24 at the time of 1971 war, said that two of his brothers had also participated in the war. “My younger brother ​was ​martyred,” he said.

Addressing students, Masand said, “Think how you can take our country forward with or without war.”

Veteran Brigadier (retired) Madan Mohan Bhanot said that the memories of 1971 war as sharp as ever.

“When Pakistan air force attacked India, my wife told me that I should go to the war without any hesitation in mind. She said she will take care of both of our sons if I died in the war,” Bhanot said.

He stated that his five generation had been in army and fought wars. “There ​were several persons of Bhanot family ​who were ​martyred,” he said. He said that his mother never wanted me to join army but he still did.

Recalling how the then prime minister boosted morale of solider, Bhanot said Indira Gandhi came to us and ​said that ​now she was talking to her solider​s​ in India​ and then ​pointing her finger towards ​East Pakistan she said ​that ​next time I will meet you there. Her words filled us with so much of courage and we captured 67 kilometer inside East Pakistan. When we won war, she came to meet us there. She told us that she had come to keep her words,” ​​Bhanot said.

Dr Satish Motiwala said that he did not know where he was ​going when ​he was called by the Army headquarters. ​At first, I was told to go to Calcutta ​and ​from there​ ​I was taken to Agartala. At Agartala, I was accompanied by some more personnel. We travel​led​ in a vechile until we reach​ed​ an unknown destination ​at night. The following morning when we woke up we were told ​that ​this is Indo-East Pakistan border.

I rapidly set​ ​up my hospital there. There, army personnel would be trained and launched to ​the ​East Pakistan border. “As we continue to capture areas, we will ​shift our facility inside East Pakistan. I treated our wounded army personnel, Mukti Bahini guerillas and Pakistan soldiers,” he remembered.

Vice chancellor Prof Renu Jain also spoke on the occasion. She said that the nation is proud of India armed forces who divided a Pakistani threat into two pieces in 1971. She said Indian armed forces are unmatched in the world.

Registrar Anil Sharma stated that the war heroes ​had ​brought the 1971 war scenes alive. “We had just read in magazines and newspaper what had happe​ne​d in 1971. Today, we were thrilled to hear it from the horse’s mouth,” he said.