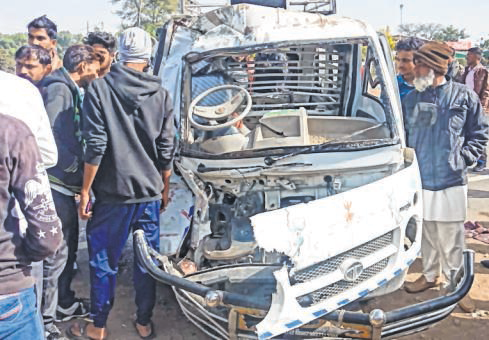 Indore: More than a dozen school students were injured and one died as a Magic van they were travelling in collided with a tanker near Sunarkhedi Fata at Nogaon in Dhar on Friday. Nonetheless, Kanhaiya, son of Meherban, one of the gravely injured students died on way to hospital.

This accidents has taken place nearly a year after Delhi Public School bus accident, which claimed life of four children. A tanker coming from Gujarat was going to Rajgarh to Indore, while the Magic van was taking the students back from Sunarkhedi Fata to Dhar. To avoid police officials standing at the post, the tanker changed lanes and rammed the Magic head on. The students were gravely injured including the van driver.

Police officials standing there fled instead of helping the injured, which enraged locals. The students were taken to private hospitals. After primary first aid, four of them were referred to Indore including the driver. The local residents submitted a memorandum to sub divisional magistrate Virendra Singh Katare demanding reason why policeman fled. Assistant sub inspector Kailash has been suspended with immediate effect.

The case of these policemen has been handed over to additional superintendent of police for further action. Commenting on incident collector Deepak Singh said, “Road where the accident happened has been closed temporarily. We are also working for better healthcare for injured and helping the deceased child’s family.”

After the accident, local residents staged protest and blocked the road demanding action against policemen who fled the spot after the accident. During protest, a long queue was seen on either side of the road. Locals told officials that absence of road signs could be the reason of accident. On January 5, 2018, Delhi Public School bus in Indore met with an accident in which four children died. The then CM Shivraj Singh Chouhan had met the family members of children and assured to take action against the guilty.