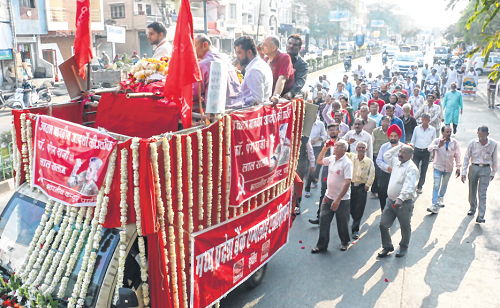 Indore: Perin Daji (90), widow of prominent Communist Party of India leader Homi F Daji, passed away here on Wednesday at 10.30 am. Perin Daji was admitted in a local hospital three days back due to age-related problems. The body was kept at CPI office Shaheed Bhawan where several senior political leaders and party leaders paid homage to her.

The CPI workers offered ‘Laal Salam’ to Perin Daji at Shaheed Bhawan. Her final rites were conducted at Malwa Mills crematorium. Perin, who was born in 1929 and brought up in Indore, was married to Homi Daji at the age of 16 years. Perin was an English teacher in St Raphael’s School.

At the age of 45, she left teaching and completely focused on supporting her husband and CPI to fight for the rights of needy people.She continued to work for uplift of downtrodden though she lost her husband Homi Daji, her son Rusy and daughter Dr Roshani.

Perin’s nephew Firoz Daji said, “Till six months back, she took part in CPI demonstrations and activities. Later, her failing health confined her to home. She was always active during elections and worked for social causes initiated by CPI.” According to Firoz Daji, she was the founder of Mahila Federation of India, Indore unit.

The federation worked for improving condition of women employed in bidi industries and other enterprises. He recalled her contribution in fighting for vendors whose handcarts were seized by IMC. “She also helped junior doctors of MY Hospital during their strike for increasing their stipend”, he added.

Sharing his views on work of Perin Daji, CPI leader Vineet Tiwari said though she was born in an affluent family, she married a CPI leader and lived in extreme difficulties. She led a life of simplicity and struggle. “After Homi Daji suffered paralytic stroke, Perin was like her shadow. She will take him to every party gathering and will actively take part in all demonstrations,” Tiwari said.

Aarti Sarkar, a former student of Daji said, “She taught me English from classes VI to VIII. She was bold and down to earth. In our school, she was the first woman who openly spoke about women’s problems and educated school girls about it. I met her few years back at a school function and found her to be same energetic woman I saw during my school days.”

Homi Daji, a Parsi, was born in Mumbai and grew up amidst financial difficulties though he managed to study at Holkar College in Indore and at Agra University. He obtained MA and LLB degrees. He was elected to Lok Sabha in 1962. He was elected MLA from Indore-2 assembly constituency in 1972. He died on May 14, 2009.

Chief minister Kamal Nath expressed grief on Wednesday over demise of Perin Daji. “In the period after her husband passed away, Mrs Daji ceaselessly continued his incomplete works,” Nath tweeted.

As a teacher in St Raphaels Higher Secondary School, Perin Daji set up revolving fund with students under which money was pooled in to give micro loans to the needy for buying handcarts, sewing machines etc on every Republic Day. It was aimed to financially strengthen the weaker sections by promoting self-employment among them. The beneficiaries were required to repay loan in monthly instalment of Rs 500. She was head of the committee, which selected the beneficiaries after verifying his/her antecedents.

Perturbed over the fact that ex-workers of defunct Hukumchand Mills were struggling to get their salaries, gratuity for last 24 years, she wrote a letter to the then President Pranab Mukherjee in 2015-2016 seeking his intervention in the matter. Acknowledging her cause, President replied while forwarding the matter to union textile ministry. Besides, she wrote to Prime Minister Modi in Gujarati to draw his attention to ex-workers’ plight.

“Perin Daji was a role model for me and many others. She was a mother figure for social activists as she always uses to say, ‘Apne Liye Jiye to Kya Jiye’. I am deeply saddened with the news of her demise.