A proposal to open the school at full capacity has been sent to Chief Minister Shivraj Singh Chouhan. School Education Minister Inder Singh Parmar is also in favour of the opening of schools with full strength. In the proposal, it was recommended to open all the schools soon, but due to the main three points, orders could not be issued on Sunday.
Tina Khatri 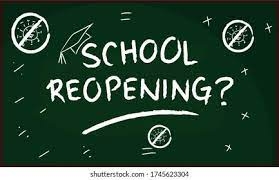 Indore
Gear up parents! Schools are all set to open in full swing with no option for online classes soon.
As per the latest statements from the government and education department, there are chances that schools will soon open with no online classes in the coming weeks.
In Madhya Pradesh, parents from Class 1 to Class 5 need to get mentally prepared to send their children to school.
A proposal to open the school at full capacity has been sent to Chief Minister Shivraj Singh Chouhan. School Education Minister Inder Singh Parmar is also in favour of the opening of schools with full strength.
In the proposal, it was recommended to open all the schools soon, but due to the main three points, orders could not be issued on Sunday.
Following the proposal, the government is discussing whether there will be any compulsion to take permission of parents or not. Secondly, will sports activities be allowed in schools or not.
Finally, the question arises whether schools will be organising prayers\assembly or not in the schools.
According to the officials of the School Education Department, orders can be issued regarding the opening of schools during this week itself.

Indore has about 200 schools affiliated with Central Board of Secondary Education (CBSE). Some schools are already operating from Class 1st to Class 12th according to the guideline of the government, while some schools have issued offline and online class time tables for three days for each type of classes.
Some schools in Bhopal released the timetable for offline and online classes for all classes on Saturday. Some parents claimed that the same was done by some schools in Indore.
Most schools have clarified that now the examination will be offline only. This has become a firm statement for higher classes as CBSE term 1 exams are being conducted offline.
2,406 schools in Indore
There are total 2,406 schools in the district. Out of which 139 are affiliated to CBSE, 17 to CISCE (Council for the Indian School Certificate Examinations) and 2250 are affiliated to MP Board. This includes about 1,120 government schools.
Most schools affiliated to CISCE and CBSE boards are willing to take the process of opening the schools in full swing slower; as compared to MP board affiliated private schools.

“In case of CBSE and CISCE affiliated schools, most students come from affluent families, so online classes can be conducted easily,” Gopal Soni, vice president of association of MP board private schools, said.
He added that education is must for all the classes even primary. “Many kids in primary classes are not able to attend the classes online properly, so it is troublesome for their future,” Soni said.
Currently, kindergarten classes are not being held and only classes from 1st to 12th are being held.
In this also, only 50% capacity and permission of parents is required.

Offline classes help in other developments than academics

“Students learn better in offline classroom for sure,” UK Jha, chairman of Indore Sahodaya complex of CBSE schools, said. He noted that students had been losing their basic mannerism and social skills in online classes.
“We started opening schools slowly, even after guidelines, but now, 50 per cent students are coming to school and more want to come,” Jha said.

Most students are excited & hopeful

Most students are happy, hopeful and cheerful considering that school life can be normal. “I miss going to school, meeting my friends and eating together in mess,” Aarna Jaiswal from Grade 2, said. She attends offline classes on alternate days, but misses sitting with her best friend.
“We are going to tuition classes, so why not schools and learn,” questioned Jiya Saharsbuddhe from Grade 7. She did feel vaccination would have been a better idea first.

Most parents of primary school students are apprehensive about sending kids to school now. “It’s already November end, so I don’t see why is it a must for my 6-year-old to go to school to attend classes in this academic session,” Kanisha Sharma, a mother, said.
A parent and social activist Sanjay Mishra wrote a letter to the state government and school education department. Along with the demand for vaccination before starting the schools in full swing, he demanded, “The results of the first phase and second phase of the sero survey conducted by the government should be made public and further action should be taken only after taking opinion on the results of the survey from the experts.”

Schools were opened in MP in three phases
First phase: Classes of 11th and 12th were started two days a week with 50% capacity. Apart from this, classes of 9th and 10th were held on the same day in a week. The students were given the option of both online and offline.
Phase II: Extended class days from 9th to 12th.
Third phase: From 1st September, all classes from 6th to 12th were held daily (except Sundays). The limit was kept at 50% only.