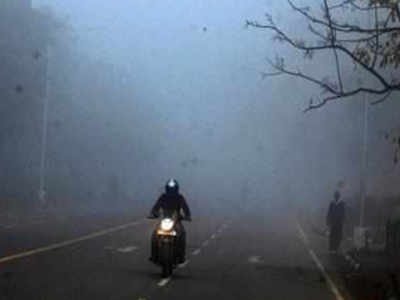 Moreover, the visibility was also dropped to 2000 meters at 7 am on Thursday morning and the meteorological department officials believe it a result of slight increase in humidity.

Meanwhile, the day, and night temperature remained below normal temperature and the weathermen expected more cold weather in the coming days.

On Thursday morning, denizens woke up to a misty and chilly morning and the cold winds which were blowing disturbed the routine of those who woke up early.

By the month of November the post monsoon establishes itself and weather is generally fine with mainly clear or partly cloudy sky. During November, there are no sultry weather experiences like October and nights are much cooler than October nights. Night temperatures happen to fall quite rapidly during the course of the month. Moist monsoon air is completely replaced by the dry northerly winds. Mornings are generally pleasant and comfortable. Nights from the second half are rather chilly. Surface winds are generally light and usually from easterly or northeasterly direction.

The average monthly rainfall of this month is 15.8 mm with 1.0 rainy day. Substantial rainfall usually occurs in this month in association with the passage of western disturbances moving eastwards across the northern parts of the country. On rare occasions there may be morning fog. The normal day and night temperatures range from 29°C to 31°C and 13°C to 15°C, respectively.