Indore: INSIDER TRADING! Trader's wife involved in theft of Rs 80L at her own house

​"It is a case of rivalry between two sisters-in-law that took such an ugly turn. The accused wanted to teach her sister-in-law a lesson and also get rich in the process. This is a rare case that we have encountered," said a senior police officer.
Staff Reporter 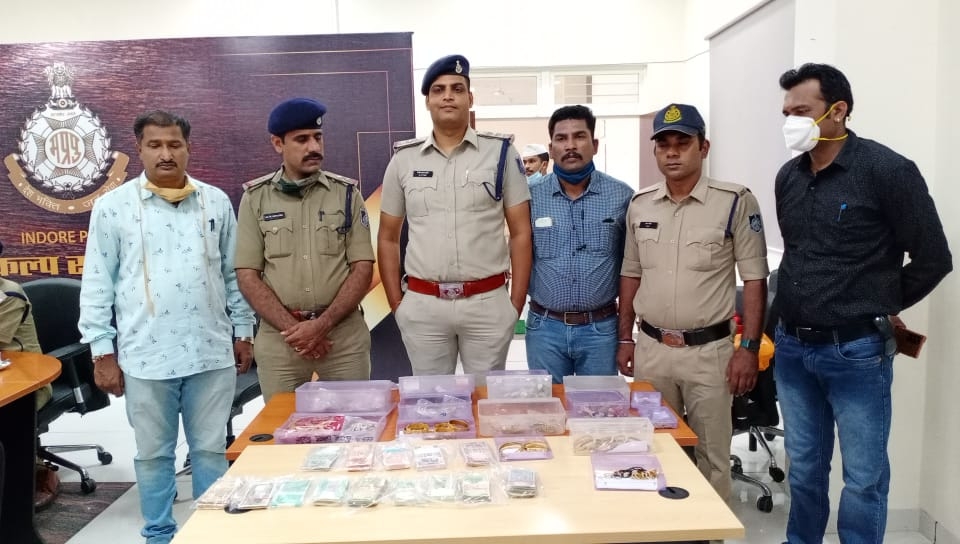 Police on Saturday arrested two persons including the brother of the complainant's wife in connection with the theft of Rs 80 lakh from a utensil trader residence in Chandan Nagar area.

Shockingly, the complainant's wife was the mastermind, while her brother along with his employee committed the actual theft, and took away cash and valuables from the house. The trader's wife is yet to be arrested. Police said the trader's wife was jealous of her sister-in-law and wanted to teach her a lesson.

SP (west) Mahesh Chand Jain said that the theft incident occurred at the house of Rahul Agrawal, a resident of Gumashta Nagar area of the city a couple of days ago. Agrawal is a utensil trader in the city and he was at his shop at the time of the incident, and other members were also out. The police were informed about the theft by the family members.

After receiving information, ASP Prashant Choubey and other officers of Chandan Nagar police station, Annapurna police station and Dwarkapuri police station, fingerprint experts and FSL team reached the spot. At that time of the incident, the complainant had told the police officers that the thieves had taken away cash and valuables worth Rs 80 lakh from the house.

On the instruction of the senior officials, two police teams were constituted to trace the accused. One of the teams was instructed to examine the CCTVs of the colony and other places and another team was gathering information about the visitors or the domestic help etc.

CCTVs of up to 3 kms from spot examined

A team of Chandan Nagar police station started examining the CCTVs and they searched the CCTVs up to three kilometres from the spot. During the CCTV examination, two persons with helmets in their hands were seen entering and coming out of the house. Their auto-rickshaw was parked at some distance from the complainant's house. Police found that the suspects committed the theft within 20 minutes and fled as if they knew exactly where the booty was kept. Police checked other CCTVs along the route and found the grab of the same suspect in a CCTV installed near Dussehra Maidan too.

Here, they saw the suspects alighting from the auto-rickshaw and fleeing on a scooter from there. Since their faces were visible in the CCTV footage at Dussehra Maidan, the police asked the family members if they knew the suspects and were astonished when they were told that one of the suspects looked like Vaibhav, the brother-in-law of the complainant.

Police detained Vaibhav, who allegedly confessed to committing theft. Police were stunned when they were told that he had committed the theft with the help of his employee Arbaz, on the instructions of his sister Madhuri. Vaibhav is a resident of Vyankatesh Vihar Colony in the Aerodrome area.

According to the police, Vaibhav informed the police that his sister Madhuri (complainant’s wife) suffered from an inferiority complex as her brother-in-law and his wife (sister-in-law) had more property than her.They had also bought a house in the city, which further fuelled her jealousy.

On the day of the incident, Vaibhav’s sister informed him that there would be no one at home. She told him she would be taking her mother-in-law out of the house on the pretext of seeing a doctor. She told Vaibhav the exact location where the gold and cash were kept in the house. Just to confuse the police she told him to steal jewellery and cash kept in her almirah also, along with that of her sister-in-law and her mother-in-law.

The police have seized gold ornaments weighing 1.6 kilograms, 40 grams of diamond ornaments, about 600 grams of silver ornaments and Rs 20,000 in cash from accused Vaibhav and his accomplice. His scooter was also seized by the police. In this case, the police have booked the complainant's wife under Section 120-B of the IPC and further investigation is underway.