The candidates should have above 60% in Physics and Maths and graduation completed with above 60% for general duty and completed engineering degree for technical branch.
Staff Reporter 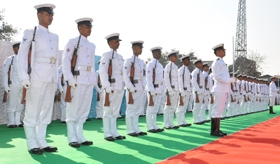 Indore:
The Indian Coast Guard (ICG) is inviting online applications for the post of assistant commandant which can be filled on www.joinindiancoastguard.gov.in from December 6, to December 17, 2021.
ICG a maritime force of Ministry of Defence is entrusted with coastal security in real-time in air and sea.
Col Nikhil Diwanji mentoring aspirants said, “The candidates should have above 60% in Physics and Maths and graduation completed with above 60% for general duty and completed engineering degree for technical branch.”
He shared that the age criterion requires candidates to be born between 1 July 1997 and 30 June 2001.
ICG has two-phase selections, first stage is held at Coastal Guard centres in the four metros which consists of the picture perception and discussion test and very tough IQ tests.
The IQ tests are shown on very fast moving slides and requires in depth and timed practice training.
The candidates who clear stage one are called for Final Selection Board in Noida where he undergoes psychological, group tests and personal interview.
“The candidates who clear the medicals and are in final merit undergo approx 5 months training in the prestigious Indian Naval Academy in Kerela after which they get commissioned in a glittering passing out parade as Group A Gazetted Officer,” Diwanji added.
In the notification the vacancy for flying branch is only for candidates, both female and male who hold valid commercial pilot licence approved by DGCA. Notwithstanding this, the ICG gives its officers after four years of service to opt for the flying branch.
The age relaxation criterion for reserved candidates is given in the issued notification.