Indore: I am happy that people have finally got a govt: Mahajan

She said that NCP was concerned about the farmers of the state and now they should work with BJP for farmers' welfare and for stable government for five years.
Staff Reporter 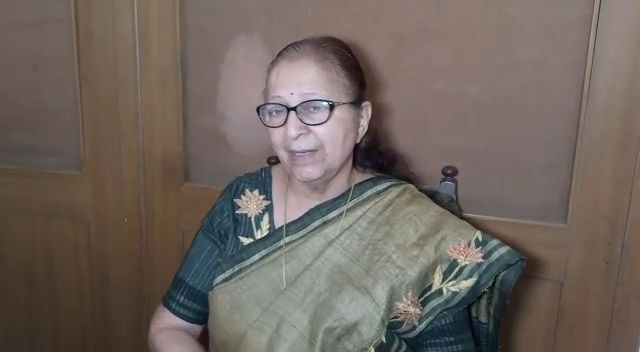 Indore: Former Lok Sabha speaker and BJP leader Sumitra Mahajan expressed her happiness on the formation of government in Maharashtra, following an alliance between BJP and NCP.

Talking to media on Saturday, she said, "I am happy that people of Maharashtra have got a government finally. People have chosen BJP as the biggest party and wanted Devendra Fadnavis as the Chief Minister again."

She said that NCP was concerned about the farmers of the state and now they should work with BJP for farmers' welfare and for stable government for five years.

"I always have a soft corner for Shiv Sena so I was surprised by their decision not to go with BJP even though the people had voted for their alliance," she added.

Replying to a question whether sending Chhagan Bhujbal to jail during BJP rule in the state would prove a dampener in the new found alliance with NCP, Mahajan said, "No charges were proved against Bhujbal and as per the law, charges have been proved and only then is the person guilty."

However, she refused to say much about the effects of this alliance in Central Government and said that she is retired now and can say only that those have taken step must have thought something about it.

BJP celebrates formation of government: After the surprising twist in Maharashtra politics and formation of BJP government, local BJP leaders celebrated throughout the day by distributing sweets and bursting crackers.