Indore (Madhya Pradesh): In a tragic incident, two youths were killed in a road accident in the Pardeshipura area late on Thursday. They were returning home when they lost control and their Bullet bike rammed into the road divider. Both the deceased were sons of two officers of the 15th SAF battalion stationed in the city. The police are investigating the case to know the exact circumstances under which the accident happened.

Pardeshipura police station in-charge Pankaj Dwivedi said that the incident took place between Bhagirathpura and Rajkumar Bridge on MR-4. Mayank Ajnare (20) and his friend Mayank Tomar (18), residents of the 15th Battalion of the SAF were on a bike. They were returning home from somewhere when their bike rammed into the road divider and they got critically injured. Some passersby informed the police who took them to the hospital where both of them died during treatment.

Mayank Tomar’s father is the company commander in the 15th Battalion. He informed the media persons that his son and Mayank Ajnare had gone somewhere and he had received information about the accident from an unknown person, who made a phone call from his son's phone. The caller informed that both the youths were found injured on MR-4. The family members reached the hospital where they came to know that both the youths had died. Ajnare’s father Bavaliya Ajnare is a sub-inspector in the 15th Battalion.

A 35-year-old man was killed while his 5-year-old son got critically injured in a road accident in the Lasudia area on Friday. According to the police, the deceased has been identified as Sumit Singh Gaur, 35 years, a resident of North Revenue Colony in the city. Sumit along with his child named Arman was going somewhere when a truck hit his scooter near the Dewas Naka area. In the accident, Sumit died on the spot while Arman was undergoing treatment in a city hospital.The police are searching for the truck driver. It is said that the truck hit the scooter from the rear. 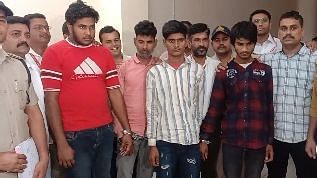