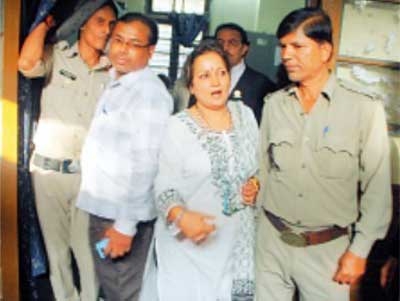 Indore :  Much to the relief of Bollywood actress Himani Shivpuri, a local court on Friday granted her bail in connection with a cheating case.

She was granted bail on a personal bond of Rs 5 lakh with a condition that she won’t be going aboard without prior permission from the court.

On a complaint of an Indore-based movie director Mohammand Ali, Vijay Nagar police had registered a case against the actress under Section 420, 506 and 294 of the IPC on the directives of a lower court.

Arrest warrant was issued against her for which she moved court for anticipatory bail.

In the complaint, Ali alleged that the veteran actress had entered into an agreement with him to act in two of his movies, on March 22, 2011 for Rs 25 lakh and Shivpuri was given Rs 5 lakh in advance in three installments.

Producer of the movies, M Dahek said that the actress had inflicted a huge financial loss on him by abandoning acting in his movies midway.

“When the director sought the advanced money back from her, she declined to refund the amount. Rather, she threatened of dire consequences if Ali would bother him,” Dahek said adding that then them moved a complaint petition on which the court directed to book her.