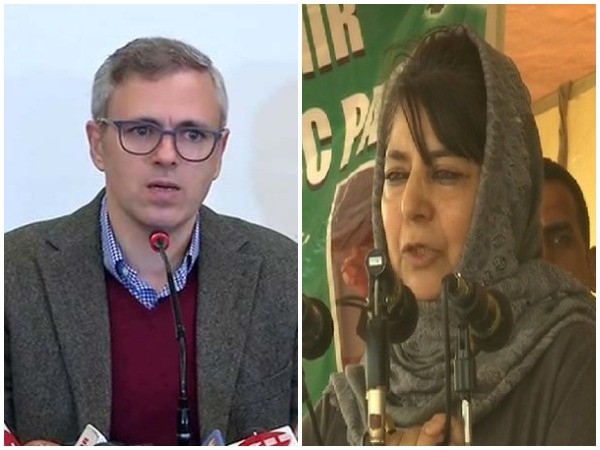 New Delhi: PDP chief Mehbooba Mufti and National Conference (NC) leader Omar Abdullah engaged in a war of words on Twitter after the passage of the triple talaq bill in Rajya Sabha, with the latter stating that PDP leaders abstaining from voting "helped the government with the numbers needed to pass the bill."

Soon after the Rajya Sabha passed the Muslim Women (Protection of Rights on Marriage), Bill, 2019, Mufti tweeted, "Fail to understand the need to pass the triple talaq bill especially since the Supreme Court had already declared it illegal. Undue interference seemingly to punish Muslims. Given the current state of the economy, should this really have been a priority?"

Mufti's post didn't go well with Abdullah, who tagged her post on the micro-blogging site and wrote, "Mehbooba Mufti ji, you might want to check how your members voted on this bill before tweeting. I understand they abstained which helped the government with the numbers needed to pass the bill.

"You can't help the government and then 'fail to understand need to pass'!" Replying to him, Mufti tweeted, "Omar sahab, I suggest you get off your moral high horse since it was your own party that expelled Soz sahab for voting against the BJP in 1999. FYI in Parliament, abstention is essentially a no vote."

Abdullah was quick to retort to Mufti's claims, and wrote, "Madam, is recounting an incident from TWENTY years ago the best you can do to defend PDP duplicity? So you are accepting you instructed your MPs to abstain. And no an abstention is NOT a no vote, a no vote is a no vote. An abstention helped the BJP this time."

The central government on Tuesday scored a major victory in the Rajya Sabha when the House passed the Triple Talaq Bill after rejecting the opposition's demand to refer the Bill to the Select Committee and to remove the criminality clause which provides for jailing the husband for three years for pronouncing triple talaq to his wife.

The Bill was passed with 99 members in its favour while 84 members voted against it in the final division. In the division on referring the Bill to the Select Committee, the government got 100 votes while 84 voted against.

The BJP-led NDA government, which does not have a majority in the Upper House, still managed to have smooth sailing for the contentious bill because parties like AIADMK, which has 11 members and JDU, with six, walked out after recording their opposition to the Bill. The BJD supported the Bill.