The group is one of those who will be performing during the roadshow of Donald Trump and First Lady Melania Trump today.
ANI 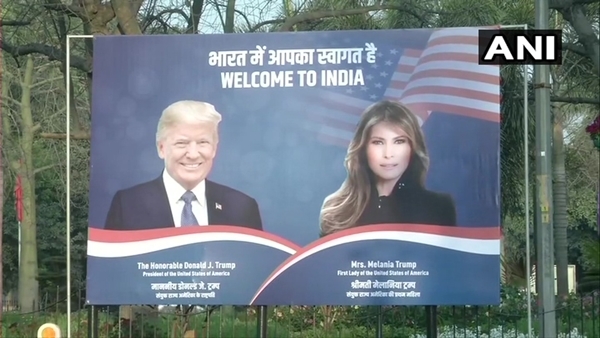 Ahmedabad: On the day of US President Donald Trump's visit to the city, a group of women dancers dressed in traditional 'ghagra choli' on Monday performed Garba at the Airport Circle in Gujarat's Ahmedabad.

The group is one of those who will be performing during the roadshow of Donald Trump and First Lady Melania Trump today.

#WATCH Gujarat: A group of Garba dancers perform at the Airport Circle in Ahmedabad. The group is one of the artists who will perform during the road show of US President Donald Trump and First Lady Melania Trump today. pic.twitter.com/jbaKomm8bK

"We are waiting for President Donald Trump to come so that we get to show him our Gujarat's folk dance, Garba. We were really happy when we were informed that we were supposed to perform for Prime Minister Narendra Modi and Donald Trump," Heena, a performer, told ANI.

They said they are looking forward to performing in front of the leaders.

Participants were seen wearing rich, traditional and colourful three-piece dresses, heavy earrings and bangles along with decorated earthen pots on their heads. Meanwhile, a lookalike of megastar Amitabh Bachchan came from Bhavnagar to Motera stadium to attend the 'Namaste Trump' event but he doesn't have a pass for it. The man, named Pinakin Gohil, said he hopes for some miracle so that he can receive a pass.

Trump, accompanied by First Lady Melania, daughter Ivanka and a high-level delegation is scheduled to reach Ahmedabad around noon.

Modi along with Trump will address the 'Namaste Trump' event at the Motera Stadium.

Grand preparations have been made for the high-profile visit with thousands of people expected to line up the streets of Ahmedabad to greet the two leaders during their roadshow.