Who is Yashwant Sinha? Know all about Opposition's joint candidate for Presidential elections

He remained Finance Minister till 2002 and then made External Affairs Minister.

"We have unanimously decided that Yashwant Sinha will be the common candidate of the Opposition for the presidential elections," Congress leader Jairam Ramesh, who attended the meeting of Opposition parties in New Delhi, told the media.

Former Union minister Sinha will be the consensus presidential candidate of several opposition parties, including the Congress, the TMC and the Samajwadi Party, the parties said in a joint statement on Tuesday.

However, his sharp critique of the Prime Minister Narendra Modi-led government in media over a host of issues running the gamut of policy to politics and tireless efforts to unite anti-BJP forces also ensured the octogenarian leader a space in the opposition camp which has now settled on him as its joint candidate for the presidential election, a high of his public life when it appeared all but over.

Sinha, who served as Finance Minister in the short-lived Chandra Shekhar government and also in the Atal Bihari Vajpayee dispensation, has always carried a rebel streak.

He boycotted the swearing-in ceremony of the V P Singh government in 1989 and then went all out against then BJP president Nitin Gadkari in 2013 over alleged corruption charges when the Maharashtra leader was set to get a second term.

Gadkari was forced to quit but Sinha's actions, which many believed had the blessings of Advani, further pushed him to the margins of the party whose rank and file always nursed resentment over the rise of a leader not really dyed in the saffron wool.

When the BJP denied him a Lok Sabha ticket in 2014 and instead fielded his son Jayant Sinha, it did little to placate him. He quit the BJP in 2018, alleging that democracy was in danger and joined the Trinamool Congress in 2021.

Born in Bihar and a Bihar-cadre IAS officer, he quit the administrative service after 24 years in 1984 and joined the Janata Party whose leader Chandra Shekhar took a liking to him, considered competent, articulate and clear-headed. He had also served as a principal secretary to the then Bihar chief minister Karpoori Thakur, also a socialist stalwart.

Sinha was soon entrusted with the key position of general secretary and made his debut in Rajya Sabha in 1988.

Various opposition leaders, including Chandra Shekhar, joined hands to form the Janata Dal to take on the Congress in the 1989 poll, and Sinha followed his mentor when he split the party to topple the V P Singh government.

As fortunes of Chandra Shekhar declined and the BJP emerged as the principal challenger to the Congress, Sinha joined the party under the influence of Advani, with whom he shared a good bond.

He was given key responsibilities, including the leader of opposition in Bihar, and later won the Lok Sabha poll from Hazaribagh in 1998, the year Vajpayee led his party to form its first regular government after the 13-day stint in 1996 when he resigned after failing to put together a majority in the House.

He remained Finance Minister till 2002 and then made External Affairs Minister.

It was during his term as Finance Minister that the colonial practice to present the Union Budget at 5 pm was junked. He has been credited with ushering in reforms and rationalisation of taxes during the Vajpayee era, though it did not make either him or the government a favourite with the RSS-backed 'Swadeshi' school of economic thought, seen to be a reason for his shift from the ministry.

With the BJP-led NDA having a distinct numerical advantage over the opposition, Sinha's prospects seem bleak in what appear to be largely a symbolic fight. But he can be counted to make the most of it.

Read Also
Who is Ruchira Kamboj? Know all about newly-appointed India's permanent representative to United... 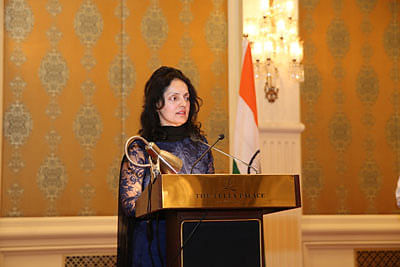 HomeIndiaWho is Yashwant Sinha? Know all about Opposition's joint candidate for Presidential elections