Water level recedes in Bengal as toll rises to 97 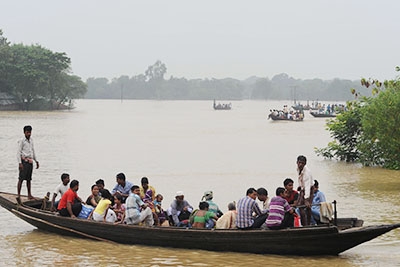 Indian residents are transported on a boat through a flooded area of Hooghly district in West Bengal state some 65 km from Kolkata on August 6, 2015. Floods from days of torrential rain have now claimed at least 180 lives in India with one million people sheltering in relief camps after fleeing surging waters, officials said on August 4. Rivers have burst their banks, hitting thousands of villages in parts of West Bengal as well as northeastern Manipur state, where roads and bridges have been cut and communications were patchy. AFP PHOTO |

Kolkata : The death toll in floods in West Bengal rose to 97 on Thursday even as the situation improved with the water level receding slowly following little or no rain and reduced water discharge from barrages. Disaster Management Department officials said the toll rose to 97 after 12 more deaths were reported on Thursday.

As the water level receded some people in the relief camps started returning to their homes, reported PTI. “Altogether, 2,719 relief camps have been set up to shelter nearly 4.19 lakh marooned people. Also 592 medical camps have been opened,” the officials said. A total 89 lakh people have been affected and 1,26,594 houses were damaged. As many as 4,24,140 houses have been damaged partly, while crop over an area of 9,45,433 hectares has been damaged.

The affected areas included 235 blocks, 55 municipal bodies, four municipal corporations and 814 gram panchayats (GPs) covering 17,546 villages, they said. Steps were also being taken to protect the affected people from health hazards and medicines and drinking water pouches were being distributed, they added in the state capital on Thursday.