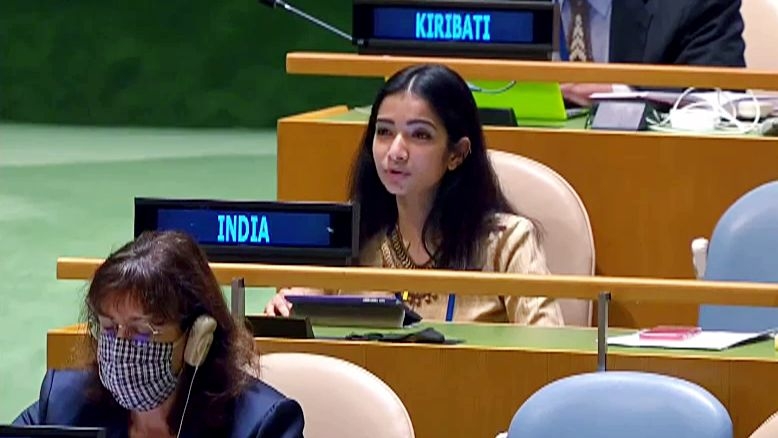 Pakistan, where terrorists enjoy free pass, is an "arsonist" disguising itself as a "fire-fighter", and the entire world has suffered as it nurtures dreaded terrorists like Osama bin Laden in its backyard, India has said in a blistering retort after Prime Minister Imran Khan raked up the issue of Kashmir in his address to the UN General Assembly.

"We exercise our Right of Reply to one more attempt by the leader of Pakistan to tarnish the image of this august Forum by bringing in matters internal to my country, and going so far as to spew falsehoods on the world stage," First Secretary Sneha Dubey said in the UN General Assembly on Friday.

"While such statements deserve our collective contempt and sympathy for the mindset of the person who utters falsehood repeatedly, I am taking the floor to set the record straight," the young Indian diplomat said, slamming the Pakistani leader for raking up the Kashmir issue in his video address to the 76th session of the UN General Assembly.

"We keep hearing that Pakistan is a 'victim of terrorism'. This is the country which is an arsonist disguising itself as a fire-fighter. Pakistan nurtures terrorists in their backyard in the hope that they will only harm their neighbours. Our region, and in fact the entire world, has suffered because of their policies. On the other hand, they are trying to cover up sectarian violence in their country as acts of terror," Dubey said.

Khan, in his nearly 25-minute address, had spoken about the August 5, 2019 decision of the Indian government on the abrogation of Article 370 as well as the death of pro-Pakistan separatist leader Syed Ali Shah Geelani.