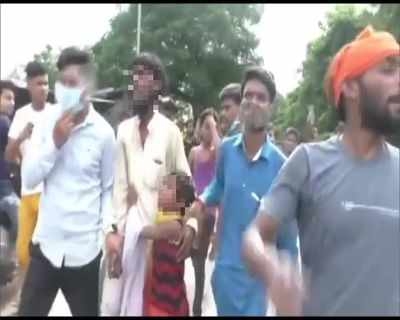 A feud among neighbors sparked off communal tension in Kanpur where a Muslim man was dragged from his house paraded on road and was forced to chant Jai Sri Ram.

A group of people allegedly from Bajrang Dal, dragged the man from his house and forced to chant Jai Sri Ram, saying that he was involved in force conversion of a girl. A video of the incident went viral, in which the daughter of the victim was seen clinging and begging to leave her father in front of the policemen.

The incident occurred in Barra locality of Kanpur where there was dispute between two neighbors belonging to different community. Both had lodged FIR against each other.

According to the local police, the Muslim family had lodged FIR accusing the neighbor of assault and giving threat. However, the Hindu neighbors had lodged complaint accusing molestation of a minor in their family and trying for force conversion.

However, after coming to know of the legal dispute between two neighbor’s police lodged a complaint of molestation only, which outraged the workers of Bajrang Dal. The right wing workers claimed that the Muslim family was trying to convert the Hindu girl in the neighborhood.

They also accused that the police has not taken the matter seriously and case is being lodged in petty sections. The workers of Bajrang Dal had created ruckus on Ram Gopal crossing at Barra in Kanpur on Wednesday evening demanding arrest of people from Muslim family.

Later on, a group of people reached at the house of Muslim family in Barra area and dragged a man out. He was paraded on roads and forced to chant Jai Sri Ram.

After a video of the incident went viral, police swung into action and lodge FIR against owner of a brass band company and his aides who were part of the group that attacked the house of Muslim man. According to police, security has been deployed in the area and search is on for the people who tried to disturb peace.