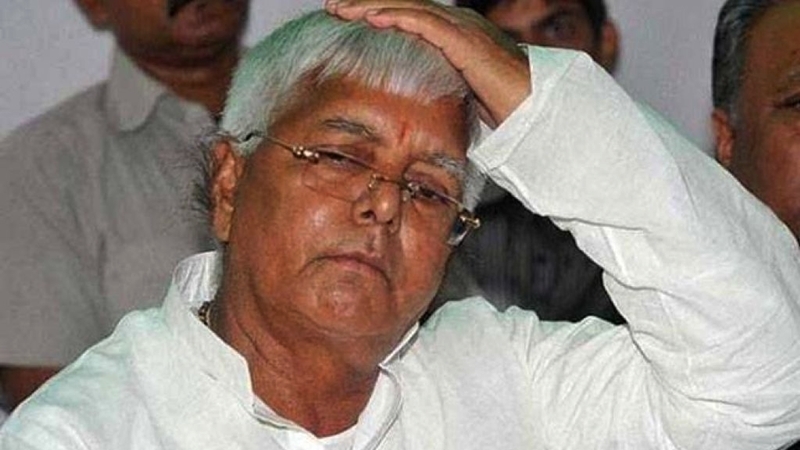 Patna: RJD national president Lalu Prasad on Thursday vehemently denounced the recently introduced 10 per cent quota for the economically weaker sections among the unreserved category, calling it the “most hazardous onslaught on the constitutional rights of SCs, STs and OBCs”.

Prasad came out with the strongly-worded remark on a day his younger son and political heir Tejashwi Yadav is taking out a ‘Berozgari Hatao, Arakashan Badhao Yatra’ from Darbhanga in north Bihar. The rally is scheduled to cover Supaul and Bhagalpur districts over the next couple of days.

Taking to Twitter, Prasad said, “10 per cent quota is a robbery and most hazardous onslaught on the constitutional rights of SCs, STs and OBCs. “This is the first step towards ending caste-based reservationsbarrier of 50 per cent reservation is broken then why government is not increasing quota in proportion to the population of SCs, STs and OBCs”.

The RJD supremo, incarcerated for more than a year on account of convictions in a number of fodder scam cases, shared his thoughts on his official Twitter handle, which is operated by people close to him. Prasad, who had earned the reputation of a messiah of the OBCs while he was the chief minister of Bihar – a state which had witnessed a sharp divide between the upper and lower castes in the Mandal era – also retweeted a couple of tweets by his son, accusing Chief Minister Nitish Kumar of involvement in the “BJP’s conspiracy to do away with reservations”.

Yadav had claimed that the last caste-based census in 1931 stated that OBCs comprised 52 per cent of the total population, yet they were given only 27 per cent reservation under the Mandal Commission because of the Supreme Court putting a 50 per cent cap on caste-based quotas.

In his tweet targeting Kumar, he attacked the JD(U) chief for remaining silent on issues like the 13-point roster introduced in educational institutions, which the pro- reservationists are up in arms against, and taunted the chief minister that he should “wear a saffron sacred thread while holding the ‘Bunch of Thoughts'” (a compilation by RSS ideologue Guruji Golwalkar).

The former deputy CM also shared a cartoon of Kumar and captioned it “Nitish listens to his inner voice” – a sarcastic reference to the chief minister’s exit from the “Mahagathbandhan” in 2017, when he had cited his “antaratma ki awaz” as reason for his decision to return to the BJP-led NDA fold.

Meanwhile, JD(U) MLC and spokesman Neeraj Kumar mocked the RJD heir apparent, saying “after a half-hearted ‘Samvidhan Bachao Yatra’ a few months ago, Tejashwi is up to a new gimmick”. “All this talk of reservations and Constitution is meant to fool the people. The only thing he may accomplish during the yatra is finalization of tickets to the highest bidder among aspirants in the Lok Sabha constituencies which he would be covering,” Kumar added.