Trupti Desai fails to make it to Sabarimala again 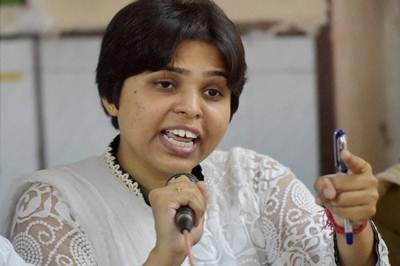 Mumbai: Leader of the Bhumata Brigade, Trupti Desai interacts with media in Mumbai on Wednesday. PTI Photo by Santosh Hirlekar(PTI4_20_2016_000189B) |

Thiruvananthapuram: Women’s rights activist Trupti Desai made another unsuccessful bid to visit Sabarimala to enforce her right to pray in the temple that has been traditionally closed to menstruating women.

The farthest she and her five-member team were able to go this time was the office of the Kochi Police Commissioner, where they faced protests from Ayyappa devotees. Last year, she was unable to leave the airport due to a blockade enforced by the devotees.

Police refused to provide her security to make the trip to the famous hill shrine and advised her to turn back as it could incite violence. They also threatened to arrest her if she did not desist. She relented at last and is said to have agreed to return by an evening flight.

Her threat to visit the temple had provoked devotees, who had begun collecting outside the police commissioner’s office and chanting Ayyappa mantras. Once they were convinced that the police would not provide her escort, they agreed to disperse.

Meanwhile, another local activist, Bindu Ammini, who was to join Desai, suffered a pepper spray attack from one of the protestors. She, along with another activist, had trekked to the temple last year stealthily, but with the help of security forces. The duo had made a big show of breaking the tradition of Sabarimala, for which both have been facing social boycott and estrangement.

Kadakampally Surendran, the minister for Devaswom, which manages Sabarimala and other temples in the state, said that Desai’s visit may be part of a conspiracy to disrupt the Sabarimala pilgrimage, which has so far had a smooth run.

He turned an accusing finger to the Hindutva forces, claiming that only a television channel supporting their cause had prior knowledge of her trip and had deputed the camera crew when Desai had arrived at Kochi airport around 5 am.

Law Minister AK Balan reiterated that the police was under no obligation to provide security to the activists, as the Supreme Court’s action of referring the review petitions on the issue to a larger bench had led to a lack of clarity on the women’s right to enter the temple. The state government will stick to such a stand until the court takes a final decision, he asserted.

The activists have threatened to initiate contempt of court proceedings against the police and the state government for refusing to facilitate their trip to Sabarimala. They insisted that they had the court’s order in support of their claim.

Desai had made headlines in 2016 for successfully braking the 400-year old tradition of not letting women inside the Shani Shingnapur temple.