The inevitable rise of JP Nadda: From student politics to BJP Working President

Nadda is expected to hold the position of BJP Working President till January 2020, after which the Party Presidential elections would take place. Before Nadda, Amit Shah was the party president from 2014 till he was chosen to be the part of Modi’s Union cabinet.

BJP, on Monday, evening announced JP Nadda as its Working President. The decision was taken at the meeting of the parliamentary board, the highest decision-making body of the BJP. The meeting was attended by Prime Minister Narendra Modi, home minister Amit Shah, and defence minister Rajnath Singh, who are all members of the BJP’s parliamentary board. Nadda is expected to hold the position till January 2020, after which the Party Presidential elections would take place. Before Nadda, Amit Shah was the party president from 2014 till he was chosen to be the part of Modi’s Union cabinet.

Before Amit Shah, Rajnath Singh was the party chief in 2014, after which he became the Home Minister of the country.

Jagat Prakash Nadda was born on 2nd December 1960 to a Brahmin family in Patna. His father Dr. Narain Lall Nadda was a Vice-Chancellor of the Ranchi University. His wife, Dr Mallika Nadda, is a professor at the Himachal Pradesh University. He was educated at St. Xavier's School, Patna. Thereafter he did his B.A. from Patna College, Patna University and LL.B. from Himachal Pradesh University, Shimla. As a child, he represented Bihar State in the All India Junior Swimming Championship held at Delhi. His political career started at the ripe age of 17 when he was elected as the Secretary of the Patna University in the 1977 student’s elections. He then joined ABVP, the student wing of RSS.

Given his leadership skills and managerial skills, he was able to defeat the Students Federation of India (SFI) in the HPU and he went on to become the student’s union president. He remained the national general secretary of the ABVP from 1986 to 1989. He was politically groomed in Bihar with the Jai Prakash Narayana movement.

Then, he was appointed as the president of the BJP’s youth wing, the Bharatiya Janata Yuva Morcha (BJYM) in 1991 at the age of 31. He first entered the electoral politics by winning the HP assembly seat from Bilaspur and was made the Leader of Opposition in the assembly.

Nitin Gadkari then chose him as the general secretary of the BJP in 2010 and has worked at the Centre ever since. He got elected to Rajya Sabha in the year 2012. In 2014, during a cabinet reshuffle, Prime Minister Narendra Modi made him the Minister of Health.

Read Also
Will try to strengthen BJP as its worker: JP Nadda 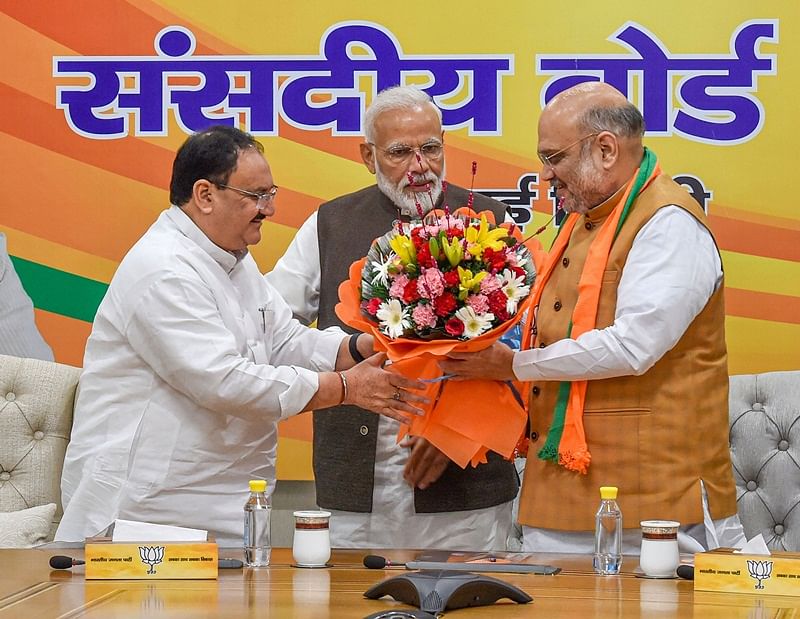 For the 2019 general elections, he was given the charge to maintain the BJP’s election campaign in Uttar Pradesh, where the party faced a tough challenge from the alliance of Samajwadi Party (SP) and Bahujan Samaj Party (BSP). He was made a member of the BJP parliamentary board — the highest decision-making body of the party and also a member of the central election committee that takes final decision for both Lok Sabha and Assembly polls. Given his reputation and his skills among his peers, many had predicted that Nadda could get something ‘important’ this time, given he was not selected by Modi for the Union Cabinet.