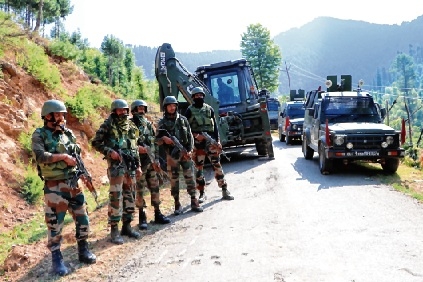 Srinagar: The Indian Army said on Friday there are inputs terrorists are planning to target the Amarnath Yatra, but the Army has its systems in place to ensure the annual pilgrimage goes on peacefully.

Speaking to reporters, 9 Rashtriya Rifles sector Commander, Brigadier VS Thakur, said, "We have inputs that terrorists would try their best to target the yatra somewhere on National Highway 44, but we have got our systems and resources in place to ensure that it goes on unhindered and peacefully."

He also said Friday's encounter in South Kashmir's Kulgam district, in which three terrorists, including a Pakistani named Waleed, were killed ahead of the commencement of the yatra, was a big success for the security forces. "It is only befitting this operation has been conducted successfully, which has led to the elimination of one Pakistani terrorist also, just four days before the Amarnath Yatra commences on August 21," he said.

Top police sources said the three killed terrorists were from the proscribed terror outfit Jaish-e-Mohammed (JeM) and reportedly included a top terrorist commander known to be an IED expert taking direct instructions from his Pakistani handlers.

Hitesh Tikoo / London: It has been revealed a UK parliamentary group, whose aim is to highlight alleged human rights violations in Kashmir, received 30 lakh PKR ($17,917) from Islamabad for a visit to Pakistan occupied Kashmir (PoK). The register of all party parliamentary groups reveal that "All Party Parliamentary Group on Kashmir" (APPGK), chaired by Labour MP Debbie Abrahams, received a benefit of between 29.7 lakh PKR and 31.2 lakh PKR on February 18 from the Pakistan government for a visit to PoK between February 18-22.