Tamil Nadu Chief Minister M K Stalin, his Cabinet colleagues, AIADMK top leader K Palaniswami, who is set to be the Leader of Opposition on Tuesday took oath as MLAs in the Assembly.

As soon as the House convened with pro-tem Speaker K Pitchandi in the chair, Stalin was the first to take oath.

Following him, other ministers, beginning with senior legislator and Water Resources Minister Duraimurugan took the oath. Two Ministers, SS Sivasankar (Backward Classes Welfare) and M Mathiventhan (Tourism), did not take the oath as they were being treated for Covid-19.

Former chief minister K Palaniswami who will be the leader of opposition, took the oath following the ministers. While Stalin, his Cabinet colleagues and DMK MLAs made a solemn affirmation, most AIADMK members including Palaniswami and former Deputy Chief Minister O Panneerselvam took the oath in the name of God. 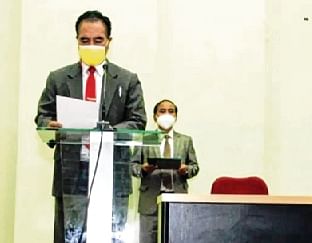 Zoram People’s Mo­ve­ment (ZPM) leader Lalduh­oma was sworn in as a new legislator on Tuesday. Speaker Lalrinliana Sailo administered the oath to Lalduhoma during a function held at the Assembly annexe building. The swearing-in function was held under strict adherence to Covid-19 protocols.