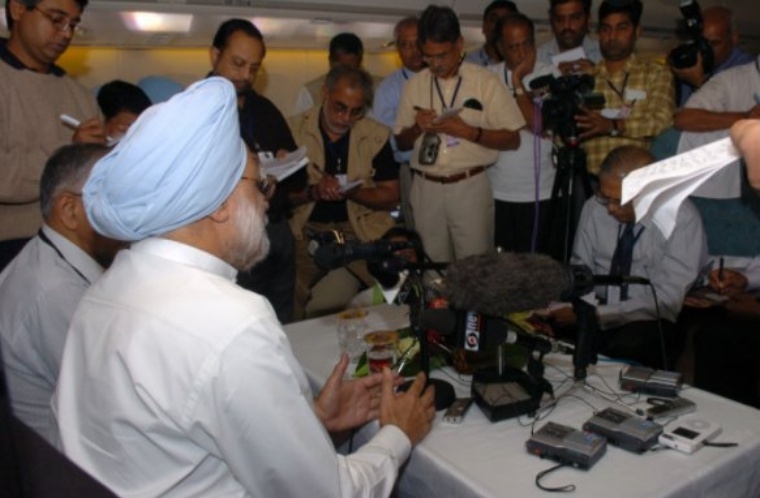 Prime Minister Narendra Modi on Wednesday on his way to the United States shared a photo from Air India One talking about working on a long flight, the Congress few hours later posted a counter, featuring former PM Manmohan Singh.

Sharing images of the former Prime Minister addressing the media in-flight, the Congress wrote: "Some photographs are harder to copy. Former PM, Dr. Manmohan Singh addressing Press Conferences on board Air India One.

Some photographs are harder to copy.

PM Modi's yesterday's post showed him going through files on his flight to Washington, where he has a packed three-day schedule, including a Quad meeting and an address to the UN General Assembly.

"A long flight also means opportunities to go through papers and some file work," the PM captioned it.

A long flight also means opportunities to go through papers and some file work. pic.twitter.com/nYoSjO6gIB

Prime Minister Narendra Modi on Wednesday local time arrived in Washington for his much-touted three-day US visit. Prime Minister Modi was received by US department of state officials at Joint Base Andrews in Washington DC upon his arrival. He was welcomed by India's Ambassador to the US Taranjit Singh Sandhu, along with the Defence attache including Brigadier Anoop Singhal, Air Commodore Anjan Bhadra and naval attache Commodore Nirbhaya Bapna.

During his visit, he will address the UN General Assembly and attend the Quad leaders Summit as well as hold a bilateral meet with US President Joe Biden at the White House.

The Congress's photo revert triggered a row on Twitter with the rival parties posting images and memes.