Days after a video of Shrikant Tyagi cursing and punching a woman at Grand Omaxe in Noida's Sector 93 went viral, Tyagi was detained.

The Tyagi community which is believed to be unhappy with Noida MP Mahesh Sharma over his role during the Shrikant Tyagi episode on Sunday held a Mahapanchayat, a major congregation, here in support of the jailed politician.

Sharma had alleged that Tyagi was not a member of BJP and just misusing its name.

Amid Tyagi's arrest, the Gautambuddh Nagar MP has also asserted that state chief minister Yogi Adityanath, and also Prime Minister Narendra Modi had a "zero-tolerance" attitude for assault on women.

After a case was registered against him, Tyagi had claimed to be a BJP functionary but the party had denied any links with him.

Showing displeasure against MP Mahesh Sharma and in support of the Shrikant Tyagi, a major congregation of the Tyagi community started in Uttar Pradesh's Noida who has been booked for assaulting a woman and misusing state government symbols on his car.

They are also upset over Sharma's alleged use of derogatory words against the community, even as the former union minister has denied making such remarks.

The congregation started around 10 am at the Ramlila ground in Gejha village on the call of locals even as hundreds of community members from parts of western Uttar Pradesh like Ghaziabad, Muzaffarnagar, Bulandshahr, Baghpat and Hapur reached here for the programme, PTI reported.

"Humare gaon mein BJP netaon ka pravesh band hai (Entry of BJP politicians is prohibited in our village," read a banner displayed at the entry of Gejha village which announced the 'Mahapanchayat'.

The mahapanchayat was also attended by Tyagi's wife Annu.

Pawan Tyagi, who identified himself as spokesperson of the Tyagi-Brahmin Association, said Shrikant had misbehaved with the woman as a result of a society-level conflict.

"Whatever charges are appropriate for that case, he must be punished accordingly. But if you press Goonda Act or Gangsters Act in such a case, is this justified? Second, his wife Annu, who is attending today's mahapanchayat, was detained by the police and the family harassed by ways of power cut etc," he told reporters.

"All this happened on instructions of Gautam Buddh Nagar MP Mahesh Sharma who had called UP government's additional chief secretary (Awanish Awasthi) while he was live on TV news cameras. This whole mahapanchayat is against Mahesh Sharma and the unfair action taken against the Tyagi family," he claimed.

"The whole community is together in seeking justice for Shrikant Tyagi and his wife," a community member who came from Agra said.

Shrikant Tyagi was arrested on August 9 from Meerut after he remained absconding for four days after assaulting and abusing a woman co-resident of his Grand Omaxe society in Sector 93B.

Speaking about the Mahapanchayat by Tyagi community, Union Minister Sanjiv Balyan said that Shrikant Tyagi should get punishment for whatever he has done but it's not right the way his family faced problems. "Tyagi community has always voted for us. So if there is anything, we'll sit & talk with them," he said.

Meanwhile, police officials said that security has been stepped up in Noida with deployment of hundreds of policemen and rapid action force (RAF) personnel being pressed into duty over law and order concerns.

Security has also been stepped up at the offices and hospitals belonging Mahesh Sharma in a precautionary measure, the police said.

Days after a video of Shrikant Tyagi cursing and punching a woman at Grand Omaxe in Noida's Sector 93 went viral, he was detained. He is presently in jail.

Noida, UP | Police take out flag march ahead of Mahapanchayat by Tyagi community tomorrow

We brought officials to get them accustomed to their duty points. Several police officials deployed at all imp & strategic points as per info we have: ADCP Noida, Ranvijay Singh pic.twitter.com/mmyELm5H8a 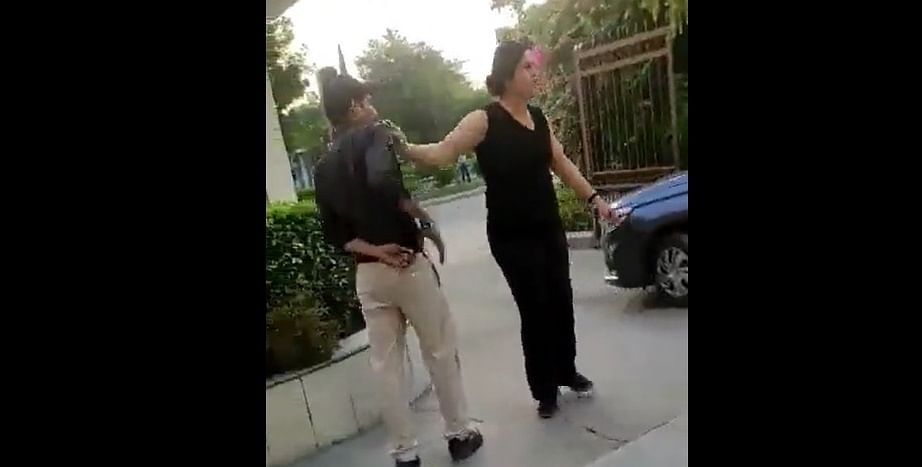