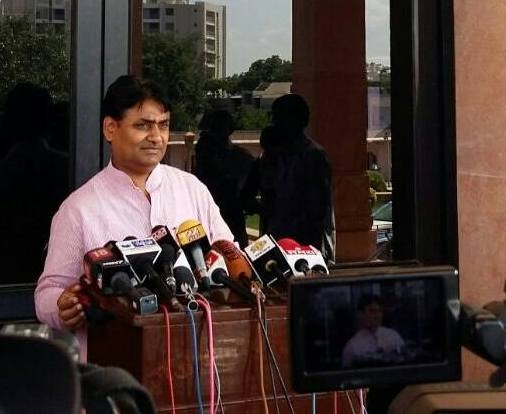 Singh's comment sparked a huge controversy. Several Opposition leaders alleged that the Union Defence Minister was "trying to rewrite history". "They (BJP) are presenting distorted history. If this continues, they will remove Mahatma Gandhi and make Savarkar, who was accused of the murder of Mahatma Gandhi and was pronounced complicit in the inquiry of Justice Jeevan Lal Kapur, as the father of the nation," said AIMIM chief Asaduddin Owaisi.

Meanwhile, commenting on the same, Rajasthan Education Minister Govind Singh Dotasra on Sunday made a gaffe. "Savarkar wrote mercy petitions in 2011 aur 2013, Mahatma Gandhi came to India from South Africa in 2015, and later he joined the independence struggle," said Dotasra. However, he corrected his error immediately after being pointed out.

This isn't the first time that the Rajasthan Education Minister has commented on Veer Savarkar.

Earlier, Dostara had said the Hindutva ideologue's demand for a Hindu nation was not a sin before independence but the BJP and the RSS are using that ideology even today to make brothers fight against each other.

''We do not deny that Savarkar participated in the freedom struggle. But the kind of ideology, work and thoughts he had, if we read them in history books, then we find that he talked about a Hindu nation, which was not a sin. At that time, our country was not free and the Constitution was not in force,'' the Congress leader had said.

''After our country became independent, the Constitution was adopted and people of every caste and religion accepted it. Despite this, the BJP and the RSS are conspiring to use his (Savarkar's) ideology to make brothers fight against each other. We are against this,'' he added.

Dotasra further said, ''We have to understand that Savarkar went to jail at that time and no one can deny this. But, after going to jail, he urged the British four times to set him free, explaining his usefulness to the British. It is recorded in history books.''