Rajasthan crisis: The story of a nose-diving Pilot & soaring Gehlot! 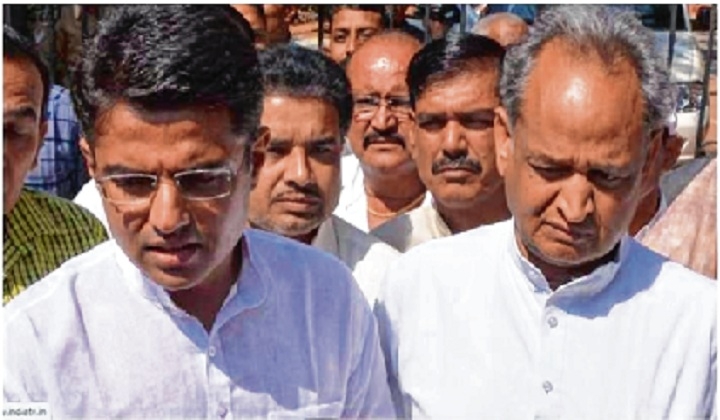 The greed of Ashok Gehlot to keep his power intact and the hunger of Sachin Pilot to stay strong in the larger picture is the reason for the tussle which triggered the Congress crisis in Rajasthan.

Since the Congress formed its government in Rajasth­an, there were two power circles created, one being led by CM Ashok Gehlot and other by Sachin Pilot.

While Congress stands at 101, the BJP and its alliance with RLD had 75 MLAs. Looking at the thin strength, Gehlot played magic and brought 13 independents under his fold. Later, 6 BSP MLAs supported Congress.

Surprisingly, Pilot, despite being PCC chief, was kept out and was informed of the de­velopments the next day vi­a the media. This was the beginning. The files of his de­pt (PWD) were sent back by Finance (under Geh­lot) qu­­o­ting ­reasons for fund crisis.

Even the ministers of his camp were facing challenges and were receiving back files from bureaucrats quoting “Please Discuss”.

During the Covid crisis, Gehlot was busy calling video conferences with health and other depts, however, Pilot was never part of the meetings. Pilot camp sources said the Deputy CM wanted the entire Congress team on ground, however, Gehlot was more interested in making his larger picture and hence centralised the operations during corona.

Even on his father Rajesh Pilot's death anniversary on June 11, when Pilot and team was about to go to Dausa to pay floral tributes, the police officials called Pilot and asked him to stay away from visiting Dausa as section 144 was imposed in the town in the wake of covid-19.

“They were busy holding meetings, camping in Marriott to prevent MLA poaching, but Pilot was intentionally stopped from visiting Dausa as it could have been his show of strength as many MLAs wanted to visit there,” said an MLA from Pilot’s team. Even the home de­pt is looked after by Gehlot. Further, the challenge started appearing grave when Pilot wanted Congress grassroots workers to get tickets for ensuing panchayat and corporation polls while Gehlot wanted to favour his closest. Also for political appointments, the CM wanted the BSP and independent MLAs to get plum posts while Pilot wanted them to be kept for Congress workers.

Pilot stood like a wall between Gehlot and his men and hence, it was expected he will be shunted out as Rajasthan PCC chief. “However, Pilot wanted to continue his term as PCC chief but was not interested in reading files as minister. The deadlock continued and when he was defamed many times by Gehlot camp in one or the other way, he then decided to bring in the high command into the picture and show his strength and that’s why this is happening now,” said a source.

It’s more like a door-die situation for Pilot but hopefully the Congress high command wa­kes up from its slumber said a PCC worker who told IANS the party seems to be cru­mbling in the state with the deadlock. “We look dead and if things don't improve, our party will be declared dead.”

Jaipur: Three Congress MLAs, who had left for Delhi and were being counted among those in Dy CM Sachin Pilot's camp in the power tussle in Rajasthan, on Sunday said they will follow the party line.

In a press meet at CM Ash­ok Gehlot's home in Jai­pur, Rohit Bohra, Danish Abrar and Chetan Dudi called them­selves "soldiers" of the party, saying they will do whatever the leadership tells them. The MLAs said their visit to Delhi was normal and the media should not speculate over it. "We are wi­th the Congress, which gave us tickets. The ongoing media trial has no sense. We are soldiers of the party and will remain so for lifetime," Bohra said.

He said they had long association with the Congress and the media should not indulge in speculation. "I have been going to Delhi since childhood. Visiting Delhi is a normal affair but this time, it was made special," Danish Abrar said, taking a swipe at the media.

"We are soldiers of the Congress Party at any cost," he said.

Chetan Dudi said they have full faith in the leadership of Chief Minister Ashok Gehlot.