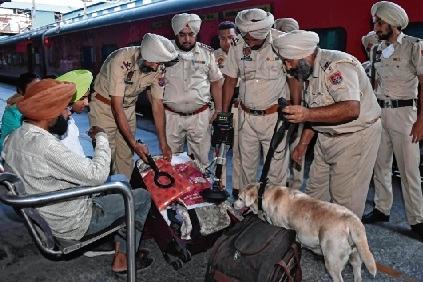 Punjab cops check the luggage of a passenger at a railway station ahead of 75th I-Day celebration in Amritsar. | —AFP

The Punjab police on Monday recovered an Improvised Explosive Device (IED) fitted inside a tiffin box, hand grenades from Lopoke village in Amritsar near the Indo-Pak border, and foiled a major terror attack ahead of the 75th Independence Day. “Some recoveries were made yesterday in Amritsar (rural) which include 5 grenades, Improvised Explosive Device (IED)-fitted tiffin boxes & 100 rounds of 9mm pistol. As per our assessment, these bombs were delivered via a drone from across the border”, Punjab DGP Dinkar Gupta said addressing a presser.

Gupta asserted that they called the NSG team (after the recovery) that is currently looking into the matter. As per their preliminary report, the IED consists of 2-3 kgs of RDX. “The state will remain on high alert. We have also increased the checkings”, he stated, adding that there is pressure from across the border on outfits that are involved in anti-national and militant activities to carry out some terrorist actions before Independence Day.

Two newly recruited terrorists affiliated with proscribed Hizbul Mujahideen outfit were arrested in Kishtwar district of Jammu and Kashmir on Monday, officials said. Yasir Hussain and Usman Qadir, both residents of Dachhan, were arrested along with some arms and ammunition during a search operation from Kalaingassu area of Tander, a police official said. The two went missing from their houses on August 5 and two days later it was learnt that they had joined Hizbul Mujahideen terror group. A case under unlawful activities (prevention) act was registered at Dachhan police station, the official said.

The BSF said a “big terrorist activity” ahead of I-Day was averted with the recovery of arms and ammunition from a hideout in Poonch.

NIA conducted raids against members of the banned Jamaat-e-Is­lami (JeI) in the Kashmir va­lley for a second day on Monday in a terror-funding case.

NIA sleuths, along with police and the CRPF personnel, carried out searches at 5 places in north Kashmir’s Bandipora, a day after raids at 56 locations across the 10 districts of Kashmir and four — Ramban, Kishtwar, Doda and Rajouri — of the Jammu province.

“Incriminating documents and electronic devices were seized from the premises of the suspects,” an NIA spokesperson said. The raids on the premises of office-bearers of the proscribed outfit, its members and also the offices of trusts purportedly run by the JeI were conducted over 2 years after the sociopolitical and religious group was banned by the Centre under anti-terror law, the Unlawful Activities (Prevention) Act.