Prime Minister Narendra Modi hits out at SP, BSP, says rivals coming together only to defeat BJP in Lok Sabha 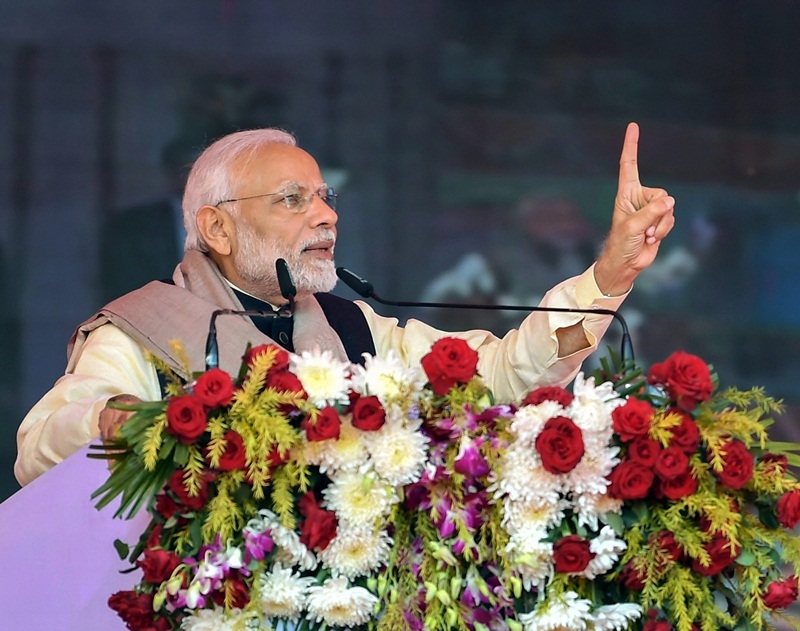 Agra (UP):  Prime Minister Narendra Modi on Wednesday attacked the opposition SP and BSP, saying the parties that opposed each other were now forming an alliance just to take on the BJP. The prime minister was addressing a public meeting here after launching projects worth Rs 2,980 crore, reports PTI. “Rivals are coming together just to oppose us. Political rivals who did not even like to look at each other are now coming together just to oppose us,” he said, without naming the two parties.

The prime minister mocked their bid to stitch an anti-BJP alliance, while recalling the 1995 state guest house incident in Lucknow in which Bahujan Samaj Party chief Mayawati was targeted by Samajwadi Party workers. Modi’s attack came amid reports of the two parties agreeing to form an alliance to take on the Bharatiya Janata Party in the upcoming Lok Sabha elections. The prime minister said they are coming together because they are afraid of the country’s watchman. “They fear the chowkidar, which is why they want to throw me out of power,” Modi said, citing alleged scams in sand and gravel mining in Uttar Pradesh when the SP and the BSP were separately in power. Referring to the recent CBI raids in the state in connection with the alleged mining scams in that period, Modi said, “The investigating agencies are seeking an answer from them about their misdeeds and so they are conspiring against the chowkidar.”

“Some people are coming together against the chowkidar. In Uttar Pradesh, you can also see that those who deprived the poor of their rights by snatching sand and gravel have now started a cooperation campaign in corruption,” he said. “To hide their scams and corruption, they are shaking hands,” he said. He also referred to AgustaWestland middleman Christian Michel, saying ‘Michel mama’ is in the country’s custody and they are worried that he might reveal secrets. Describing himself as a “chowkidar”, Modi said he has undertaken a “safai” (clean-up) mission to rid the country of corruption and he cannot be “bought” “scared off”. “This chowkidar doesn’t sleep and can spot a wrongdoer even in darkness. They may continue abusing me but I will not stop my mission to uproot corruption,” Modi said.