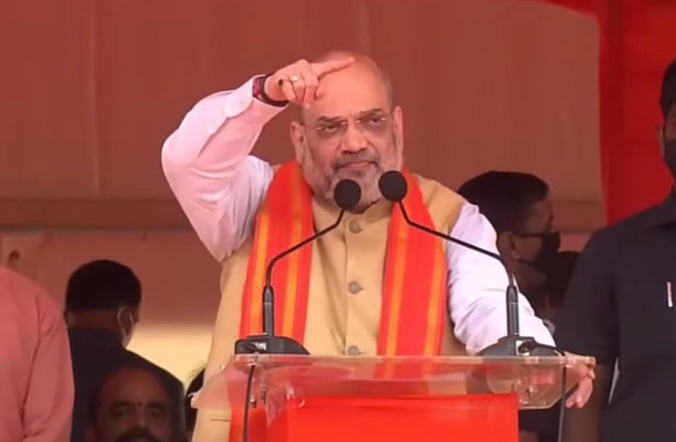 After 70 years of independence, PM Modi transformed the state of governance for the poor in India, Home Minister Amit Shah said while public meeting on Friday in Nirmal, Telangana. "He provided them bank accounts, houses, toilets & now, he's providing them with clean drinking water. He also helped them with Ayushman Bharat - health coverage worth Rs 5 lakh", Shah added.

Slamming the Telangana Chief Minister K. Chandrashekar Rao for not declaring September 17 as 'Telangana Liberation Day' ever after making promises to do so. "What happened to your promise? Who are you afraid of?", Shah questioned.

"The Bhartiya Janata Party (BJP) is not afraid of anyone! We promise we will celebrate 17th September every year as Telangana Liberation Day", he affirmed.

Taking pot shots at the opposition, Shah said that the Congress' presence is rapidly declining across India. "Can Congress fight Owaisi? It will also do what TRS is already doing. Only the BJP can help Telangana reach its heights and regain its pride", Shah said.

Shah said that he was confident about Telangana people that they will gift more seats to PM Modi in next Lok Sabha elections.

"Telangana gave us more than 20% votes in the Lok Sabha elections. In the next LS polls, people of Telangana will gift all seats to PM Modi", he said.

The Chief Minister in a letter to Modi said, “On behalf of the government and people of Telangana, I wish you a very happy birthday. May god bless you with good health and long life for serving the nation for many more years.”