'PM Modi did not deny it, now has to take a call': Nitish Kumar on meeting over caste-based census 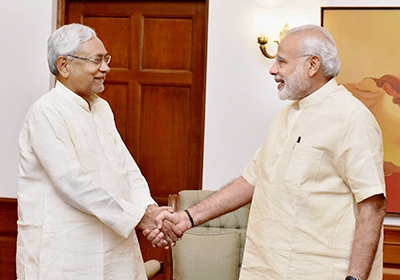 Nitish Kumar was joined by RJD leader Tejashwi Yadav and representatives of many other other parties, including the BJP, and both leaders made a strong push for counting the population on the basis of caste.

Nitish Kumar told reporters later that PM Modi heard them patiently. Asked about the Prime Minister's stand on the issue, he said PM Modi did not "deny it" (caste census) and heard out everyone.

Nitish Kumar also said the delegation had reminded the Prime Minister that the Bihar Assembly has twice passed resolutions on holding a caste-based census.

"The Prime Minister listened to all members of the delegation on caste census in the state. We urged the PM to take an appropriate decision on it. We briefed him on how resolutions have been passed twice in the state assembly on caste census," Nitish Kumar was quoted as saying by news agency ANI after the meeting.

"Recently a minister from the central government gave a statement that the caste-based census will not be conducted. This made us anxious. Following this, all parties in Bihar including the Opposition met on the issue. It was then proposed to meet Prime Minister on the issue," he added.

The Bihar Chief Minister said it is Prime Minister who has to now take a call on the caste-based census. "People in Bihar and the entire country are of the same opinion on this issue. We are grateful to the Prime Minister for listening to us. Now, he has to take a decision," Nitish Kumar said.

Speaking strongly in its support, Tejashwi Yadav said it will be a "historic" measure in helping the poor. If animals and trees can be counted, then so can people, he said.

"Our delegation met the PM Modi today not only for caste census in the state (Bihar) but in the entire country. We are awaiting a decision on this now," Tejashwi Yadav said.

Earlier, Tejashwi Yadav also had written a letter to Prime Minister Narendra Modi regarding the demand for a caste-based census.

However, the Central government has so far refused to accede to the demand. On July 20, in a written reply to a question in Lok Sabha, Minister of State for Home Affairs Nityanand Rai had said: "The Government of India has decided as a matter of policy not to enumerate caste-wise populations other than SCs and STs in the census." On March 10, 2021, the Union Ministry of Home Affairs had clarified on caste-related details received from the Socio-Economic Caste Census (SECC) 2011 to the Ministry of Social Justice and Empowerment. In a reply, the Union Home Ministry said that raw caste data has been provided to the Ministry of Social Justice and Empowerment (MoSJE) for the classification and categorisation of the data.

"The Office of the Registrar General, India had provided logistics and technical support in conducting the SECC-2011. The raw caste data has been provided to the Ministry of Social Justice and Empowerment (MoSJE) for the classification and categorization of the data. As informed by MoSJE, there is no proposal to release the caste data at this stage," the Home Ministry had said.