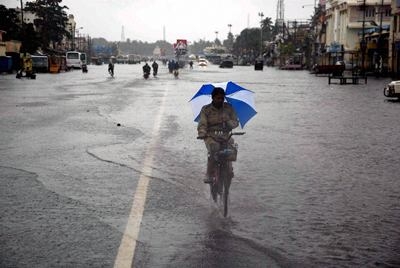 Gopalpur/Srikakulam:  Cyclone ‘Phailin’ today left a trail of destruction knocking down lakhs of homes affecting nearly 90 lakh people and destroying paddy crops worth about Rs 2,400 crore, but little loss of life was reported in Odisha and Andhra Pradesh in the country’s strongest storm in 14 years.

Official sources in New Delhi said the storm left 14 dead including 13 in Odisha after one of the largest evacuation efforts in the country’s recent history while reports from the two states said the death toll was 17 including 16 in Odisha. The deaths were reported to have been mainly caused by falling trees and house collapse.

“The loss of life has been absolutely minimal,” a senior Union Government functionary said. Nearly 10,000 people were killed in the previous powerful storm that hit Odisha in 1999.

Communication links were vastly disrupted by the strong winds that went upto a speed of 220 kmph when the “very severe” cyclonic storm crossed the coast near Gopalpur last night and weakened before turning into a depression. Ganjam district in Odisha bore the brunt of the storm.

A Panama-registered cargoship M V Bingo carrying iron ore was reported to have sunk in rough seas in the impact of the cyclone off the coast of West Bengal, but the crew were spotted in a lifeboat by a Coast Guard Dornier aircraft.

Authorities in Odisha evacuated nearly nine lakh people, the largest in recent history, ahead of the storm to cyclone shelters and public buildings like schools to avoid a repeat of the monstrous 1999 super cyclone.

“We are on the whole quite satisfied with the type of evacuation that was done,” Vice Chairman of National Disaster Management Authority M Shashidhar Reddy said. In Gopalpur, where the storm struck first, “almost 90-95 per cent people had been evacuated”.

Defence and paramilitary personnel were deployed to carry out relief and rehabilitation measures and restoring infrastructure badly affected by the storm.

The IMD said in New Delhi that Phailin has weakened into a cyclonic storm with wind speed between 60 and 70 kmph. It is currently close to Jharsuguda in north Odisha.

Odisha Chief Minister Naveen Patnaik said the primary aim was to minimise loss of human lives and they have successfully managed to do so. “Property to the tune of several crores has been damaged…Rehabilitation will now be done.”

Giving details of the devastation, Odisha Revenue Minister S N Patro said 14,514 villages in 12 districts have been affected, hitting a population of 80,53,620.

Over 2.34 lakh houses have been damaged and more than 8.73 lakh people evacuated.

Over five lakh hectares of standing crops have been destroyed by the gushing waters causing an estimated loss of Rs 2,400 crore, he said.