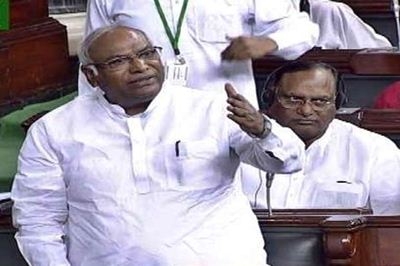 New Delhi : Leader of Opposition in Lok Sabha, Mallikarjun Kharge, on Thursday said the Congress always raises issues concerning the people and added that it is the government’s duty to govern the nation in a good manner.

“In a democracy, there is always give and take. We give some suggestions and they may agree or disagree. We always raise the people’s issue. It is their duty to govern in a good manner,” Kharge told ANI.

Kharge further said the government must take everybody into confidence for the smooth functioning of the House. Echoing similar sentiments, another Congress leader Satyavrat Chaturvedi said that it is the responsibility of Prime Minister Narendra Modi to answer on important issues as the Parliament is made for dialogue.

“The Parliament is made for dialogue. We want the political logjam to end, but it depends what is the government’s attitude on those important issues regarding which the whole country is troubled. Being the head of the government, it becomes the Prime Minister’s responsibility to discuss and answer. Parliament is the platform where the government has to answer,” Chaturvedi told ANI.