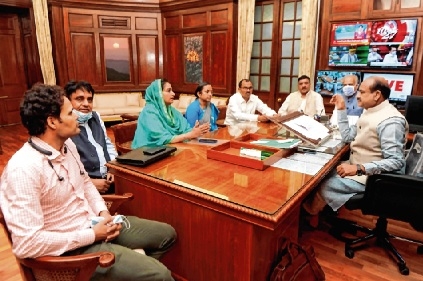 Shiromani Aka­li Dal, NCP, Shiv Sena and some other opposition parties, including the Left, have written to Lok Sabha Speaker Om Birla for a Joint Parliamentary Committee (JPC) probe to ascertain the details of farmer deaths during the “Kisan Andolan” against three farm laws.

In a letter to the speaker, leaders of various parties, including SAD, Shiv Sena, NCP, BSP, JKNC, RLP, CPI and CPI-M, have urged his intervention in the matter. The letter came in the wake of Agriculture Minister Narendra Singh Tomar’s statement that the Centre has no knowledge of farmer deaths.

The Opposition leaders said the minister’s statement has hurt the sentiments of the farming community across the country and he should apologise as he has insulted the farmers.

They said Tomar has stated in Parliament the Centre does not have any record of the farmers who died during the ongoing Kisan Andolan at Delhi’s borders.

Leaders of SAD and other parties are set to meet the president on Saturday morning. “It is shocking the ‘annadaata’ was subjected to this insult, despite clear-cut recorded proof of hundreds of farmers being martyred during the Kisan Andolan. It is even more appalling that the agriculture minister has gone on record to say neither a study has been conducted to verify the numbers of these farmer deaths nor a study to understand the apprehensions in the minds of farmers regarding the three farm laws,” the leaders said.

"Will the govt give up its ostrich-like attitude and agree to the Oppn’s demand for a full discussion in Parliament on misuse of Pegasus spyware in India? How long can the govt duck and hide and scoot when all that the Oppn wants is a full debate?," said P Chidambaram, Congress leader.

-- Govt will set up centres for women in crisis internationally: Smriti Irani

Seventy cases of Delta Plus variant were found in genome sequencing by INSACOG, a grouping of 28 labs involved in the task, Union Science and Technology Minister Jitendra Singh said on Friday. In a written response to a question in the Lok Sabha, he said so far, 58,240 samples of SARS-CoV2 have been sequenced in the country and of these, 46,124 were analysed.

No death due to oxygen shortage: Venugopal moves privilege notice

Centre: No death due to manual scavenging, activists decry response

No death has been reported due to manual scavenging, the Union Social Justice and Empowerment Ministry has told Parliament, drawing sharp reaction from activists who said that those people were being robbed of dignity even in their deaths. Manual scavenging is banned under the Prohibition of Employment as Manual Scavengers and their Rehabilitation Act, 2013.

The Kisan Sansad, being held at Jantar Mantar by the Samyukt Kisan Morcha (SKM) despite flooding by heavy rain, passed a resolution, after 2 days of deliberations on July 28-29, urging the Indian Parliament to repeal the Farmers Agreement on Price Assurance and Farm Services Act, 2020, described shortly as the Contract Farming Act.

Rejecting the law, it questioned the government’s policy to excluding the landless farmers in its agri-digitisation plans and linking entitlements to only the landed farmers, which is “clearly against the National Policy for Farmers, 2017.”

It resolved “full protection be offered to uphold farmers’ interests (economic viability, environmental sustainability and social equity) in all marke­ting options for them, such that any contract farming option is only based on prior informed consent, on par with other options available to a farmer and not on coercion.

“Further, strong regulation should be put in place at the state level which protects the small farmers from predatory contract farming, which fixes clear accountability and liab­i­l­ity on the companies which ent­er into the contract farm­ing arrangements, which sti­pulates the companies should provide at least the MSP to farmers, which ensures access to justice for the farmers and speedy resolution of cases where farmers face losses due to exploitative practices of the companies, and which removes any provisions which enable corporate takeover of the farmers’ lands,” the resolution added.

The Kisan Sansad held the Contract Farming Act is desi­gn­ed to favour big agri-busi­ness com­panies at the expen­se of farmers by enabling these “sponsor” firms to leg­a­lly bind the farmers in cont­racts to grow crops which se­r­ve their commercial interest, thus resulting in the agri-co­rp­o­­rations control and dic­tate the cropping patterns, inputs, farm service, procure­ment, processing, exports and related businesses.

It said a clause in the act for “farm services contracts” or “production agreements” is to facilitate the corporate farm­ing and help the corporates gain access to thousands of acres of land, bypassing the restrictions placed by the laws, including agriculture land ceiling act, governing the land leasing and ownership.

Delhi Assembly on its last day of monsoon session passed a resolution to repeal the 3 farm laws and advised the Centre to talk to farmers and resolve their grievances. Delhi Home Minister Satyen­dar Jain alleg­ed farm laws are aimed at be­ne­f­i­ting big firms not farmers. “The doubling of farmers’ income is a jumla. These farm laws are passed to benefit some big companies and the farmers will turn from owners to labourers. The Centre should withdraw these farm laws immediately without any condition.”