Not at fault in Lalit Modi case: Sushma Swaraj 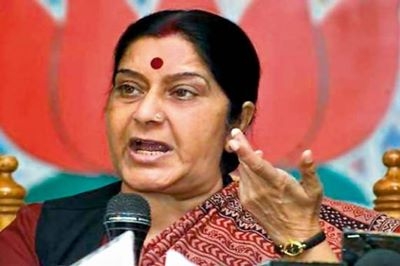 She also said she was not at fault in the issuance of travel documents to former IPL chief Lalit Modi by the British government.

“I am saying again today that there is no mistake by me,” she said while participating in a debate in the Lok Sabha on an adjournment motion on the Lalit Modi issue.

“During one of his long holidays abroad, the Congress vice president should reflect on his family’s history,” the external affairs minister said.

Sushma Swaraj denied her husband Swaraj Kaushal was a lawyer for Lalit Modi in his passport case.

The minister said the British government conveyed that Lalit Modi was given the travel documents according to appropriate rules.

Sushma Swaraj said her daughter Bansuri was a junior lawyer in Lalit Modi’s passport case but received no money.

“She was a junior at ninth number in the appearance list. She appeared with her senior. Not a single rupee was taken (by her),” Sushma Swaraj said, amid continuous slogan-shouting by Congress members.

She rejected the Congress allegations of any quid pro quo with Lalit Modi.

She reiterated she did not help Lalit Modi but his wife who was to undergo a medical procedure for cancer treatment in Portugal.

The minister hit out at the Congress for claiming conflict of interest on her part.

She said when P. Chidambaram was the finance minister in the United Progressive Alliance government, his wife Nalini Chidambaram was appointed a lawyer by the income tax department.

She said when an AIADMK member brought this to the notice of parliament, Chidambaram said he had no knowledge of the department’s decision.

Swaraj also cited other instances of alleged conflict of interest by Congress leaders.

The Congress is demanding the resignation of Sushma Swaraj over her alleged help to former Indian Premier League chief Lalit Modi, who is facing investigation by the Enforcement Directorate.

Attacking former finance minister Chidambaram, she said “How can I make public letters which were not written through the ministry of external affairs?”

“Chidambaram did not send any letter through the MEA. He kept writing to the British Chancellor of Exchequer. When a reply came to us through due protocol, we came to know that he had written,” Sushma Swaraj said.

“He wanted Lalit Modi to be deported, which cannot be done. We can have extradition. He wrote to the UK government saying that there should be deportation, no extradition…. They didn’t even think important enough to reply. So which correspondence are you talking about,” she asked.

Sushma Swaraj said the UK government kept asking again and again for an extradition request but it was not done.

Replying to a question posed by Congress leader Mallikarjun Kharge, she said: “He (Lalit Modi) got the right of residency when your government was in power. You have to tell us. Why are you asking me?”

“We did not file an appeal in a case where his passport was restored as the Enforcement Directorate did not take action in the case for four years,” the union minister said.

She accused the Congress of protecting Lalit Modi and said there were two camps within the party – one led by Chidambaram that wanted action against the former IPL chief and the other that wanted to protect him.