All vehicles will have to be removed from the two societies as well for the period, the plan stated.

August 28 - the day when the illegal 40-storey twin Supertech towers in Noida's Sector 93A will be brought down to dust in merely 9 seconds. One of India's tallest buildings will disappear from the cityscape tomorrow.

More than 5,000 residents will vacate Emerald Court and ATS Village societies and over 2,500 vehicles will be removed from there. While the twin towers had come up on premises of Emerald Court only, ATS Village is adjoining the illegal structures on the other side in Sector 93A of the city.

How and when will the demolition take place?

Over 3,500 kg of explosives will be used to raze them, according to officials of the demolition firm Edifice Engineering. According to the evacuation plan, finalised on Thursday, the residents of Emerald Court and ATS Village will have to vacate the premises by 7.30 am on August 28 and can return after 4 pm only with safety clearance from Edifice.

The company that is carrying out the Noida twin towers’ demolition, Edifice Engineering, needed 15 days to complete the process to charge explosives at the buildings, a report by the Hindustan Times said. ‘Charging’ of the explosives is a process to pack the explosives into over 9,000 holes that have drilled into the towers’ concrete. At least 100 workers are part of the demolition team, as per reports.

All vehicles will have to be removed from the two societies as well for the period, the plan stated.

"There are approximately 650 flats in Emerald Court and 450 flats in ATS Village. Both societies have a combined number of residents over 5,000 who will be required to move out as per schedule on August 28," a Noida Authority official said.

"As for the removal of vehicles, several residents have more than one vehicle. There are around 1,200 vehicles in Emerald Court and 1,500 vehicles in ATS Village that will have to be moved outside. The Noida Authority will provide space for them in the multilevel parking facility at Botanical Garden metro station," the official said.

The multi-level parking at Botanical Garden Metro station can easily accommodate more than 5,000 vehicles at a time, according to the official.

Will the demolition affect traffic?

Entry of people, vehicles and animals will be restricted in the close proximity area -- known as exclusion zone -- of the twin towers in Sector 93A. The Noida-Greater Noida Expressway, which is close to the twin towers, will remain shut for vehicular movement from 2.15 pm to 2.45 pm on August 28.

However, shutting the expressway for a longer duration will create a huge traffic bottleneck and the internal roads can be closed for a little longer.

Fire tenders, ambulances, etc, required for emergency services, shall be parked on the road constructed behind the park in front of the twin towers. 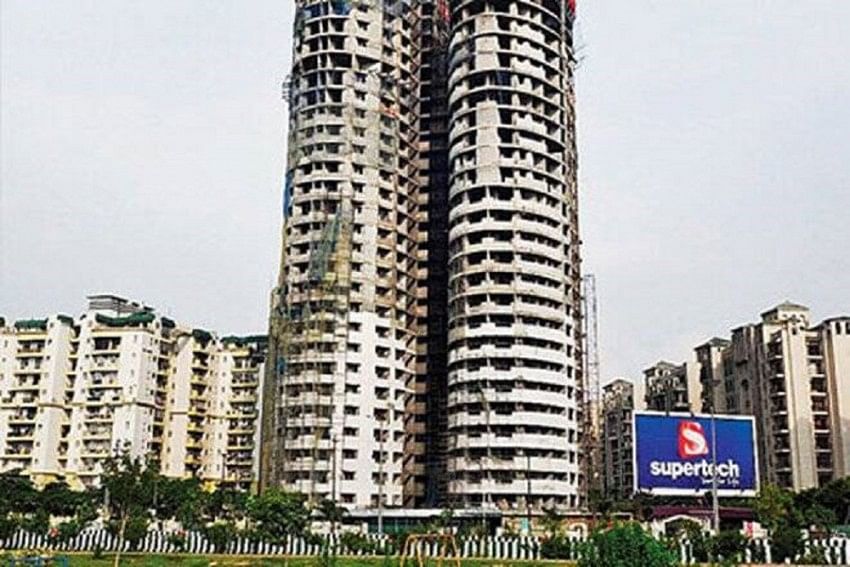