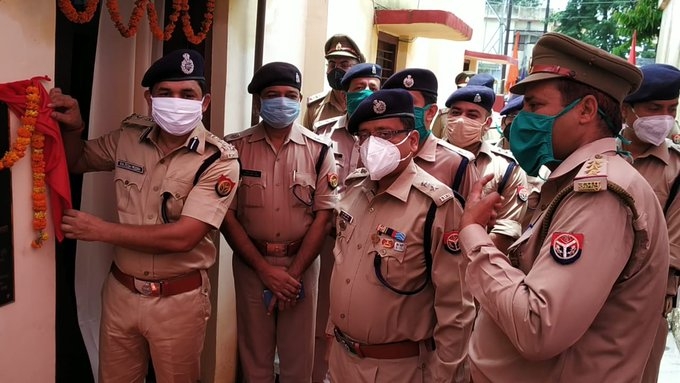 Noida: Among 75 districts in Uttar Pradesh, the Gautam Buddh Nagar district has ranked second for two straight months in terms of response time to emergency 112 call, according to official data.

Gautam Buddh Nagar police clocked an average time of 8.10 minutes to respond to an emergency in the month of May, behind only Raebareli police which had the best time of 7.49 minutes, the state-level data showed.

In the month of April, Gautam Buddh Nagar police's average response time was exact 8 minutes, behind only Kanpur city police by one second, it showed.

Deputy Commissioner of Police (Traffic) Rajesh S, who is also the officer in-charge for 112 service in Gautam Buddh Nagar, said they attended a whopping 53,405 calls.

In April and 16,428 in May - the two months when the COVID-19 lockdown was in place - and managed the second best response time in the state.

Adjoining Delhi in western UP, Gautam Buddh Nagar is spread over an area of 1,442 sq kms with a large rural area besides the urbane Noida and Greater Noida, officials said.

Currently, the district has 65 four-wheeler and 46 two-wheeler police response vehicles (PRVs) which handle emergency calls made on 112, the officials said.

All distress calls made on 112 are re-routed to the local PRVs from the Lucknow headquarters and the time duration is calculated from the moment a PRV responds to the situation till it reaches the incident spot, with both times being fed on mobile-data terminals, according to officials.

Also, the response time of any district is the average duration of urban and rural time, they said.

According to the data, the Gautam Buddh Nagar police clocked an average 8.33 minutes to respond to distress calls in rural areas and 7.12 minutes in urban areas.

The same figures for the month of May stood at 8.38 minutes in rural areas and 7.18 minutes in urban areas, the data showed.

"Rural time is always difficult because of the terrain and distance," DCP Rajesh told PTI, adding that their focus is now at reducing the response time in urban areas to 7 minutes.

He credited the consistency in the ranking to team work but also stressed that the district police wants to improve not only its timing but also ensure better after-response situation.

"My main concern is what happens after handling the distress call. We can always improve upon the timing but our focus is at ensuring that the emergency responders behave well with aggrieved persons. Being ranked second is fine, but my concern is on our personnel being sensitive and empathetic towards the caller," Rajesh said.

He added that the PRV personnel are regularly trained and a monitoring system is in place to analyse their work.

He said major portion of the distress calls during the lockdown was for food and dry ration from across the distress, as indicated in the whopping number of emergency calls.

The number of such calls came down drastically in May when a dedicated helpline for COVID-19 related issues was started in the district.

"There have been occasions when early response by PRV teams have fetched excellent results. In the month of May, a man had called up 112 and said he was going to hang himself, the PRV team reached well in time and saved him. There was another instance when PRV officials helped evacuate a family caught in fire inside their house. This was possible because the people were aware that 112 emergency number would work and it did," he added.