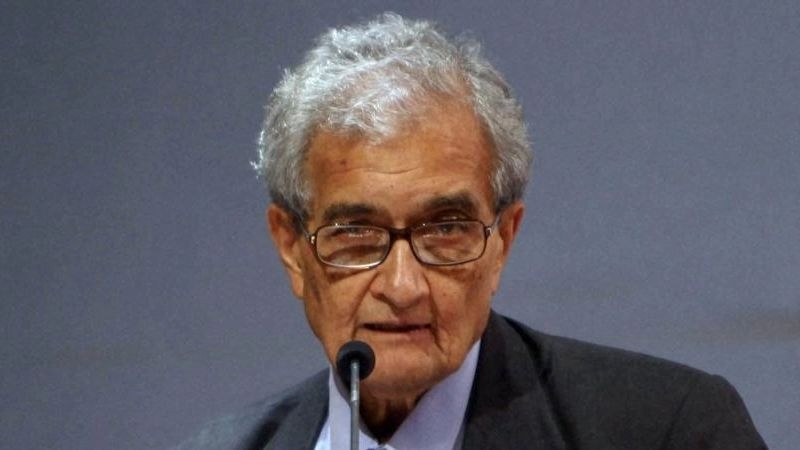 One of the greatest economists and academicians in the world, Bharat Ratna Amartya Sen's contribution to the world economy, just like the meaning of his name is "immortal."

Born on 3rd November 1933 in Manikganj (now in Bangladesh), the Indian scholar went on to win the prestigious Nobel Prize in Economics for his work in welfare economics in the year 1998. Sen spent a large part of his life outside India, however his work always focused around the poverty of India and other developing economies, and how to overcome it.

As Sen celebrates his birthday on Wednesday, let's look at some of the interesting facts about the legendary academician.

Amartya Sen's father, Ashutosh worked as a chemistry professor at Dhaka University and his mother, Amita was a writer who participated in many dramas penned by another Indian legend and Nobel laureate -Rabindranath Tagore. Interestingly, it was Tagore who gave him his name 'omorto ', which in Bengali means 'immortal'.

2. Suffered from cancer at a young age

Sen suffered from mouth cancer when he was 18 and was treated with radiation. In 1971, he was told he had a cancer reoccurrence, which fortunately just turned out to be a misdiagnosis.

3. Is one of the most decorated economists ever.

Sen won the Nobel price in 1998 and was instrumental in creating the United Nations Development Index. In 2012, he went on to become the first non-American winner of the National Humanities award. He was also named in the TIME Magazine list of "100 most influential persons in the World" in the year 2010.

4. Staunch advocate of gender equality; is an atheist

Sen is a staunch advocate of gender equality and in order to promote this he mostly used feminine pronouns while writing his papers. The world renowned scholar used 'she' and 'her' a lot more than 'he' and 'him'. Besides he is also a self-proclaimed atheist

5. Is an honorary citizen of Bangladesh

Sen has also been awarded the honorary citizenship of Bangladesh as his theory of welfare economics helped their government in creating a self-sufficient economy.

6. Is married to Emma Rothschild, member of the famous Rothschild banking family of UK

Amartya Sen got married three times. He was first wedded to prominent author Nabaneeta Dev from 1958 to 1975, then to Italian economist Eva Colorni from 1978 to 1985 (who died of stomach cancer in 1985). He is currently wedded to English economic historian, Emma Rothschild, who is also a member of the famous Rothschild banking family of UK. FPJ Edit: PM Poshan scheme - As Prof Amartya Sen said, the best place to store foodgrain is in the...