No point in asking question as democracy is murdered: Rahul Gandhi

On Monday, former Congress president Rahul Gandhi showed a new face before the opposition, who often jokes him to be inexperienced
Nimish Kumar 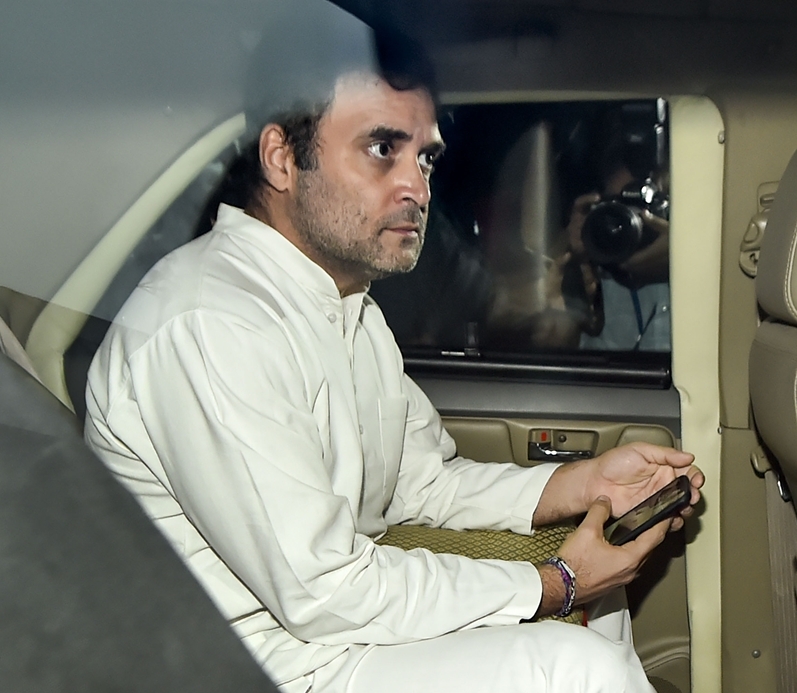 New Delhi: He literally sprint to Parliament House gate one, ducked media who were rushing for his byte and later stormed into the House which changed the day’s narrative, from Maharashtra politics to unparliamentary behaviour issues.

On Monday, former Congress president Rahul Gandhi showed a new face before the opposition, who often jokes him to be inexperienced, by politely denying to ask parliamentary question as his protest over Maharashtra issue.

Nobody, even the Speaker, was not expecting such strong parliamentary protest by Rahul Gandhi, which later fuelled his party colleagues and they all went to well to protest with placards and banner.

It all started when during the question hour, Speaker Om Birla allowed Rahul Gandhi to ask a supplementary question for which he sought permission before, but Rahul Gandhi stood from his bench and said ‘there is no point in asking a question’ as democracy has been murdered in Maharashtra.

Encouraged by Rahul Gandhi’s dare, MPs from opposition bench went into the well of the house with placards and banner and started protesting over the Maharashtra issue.

The speaker Om Birla cautioned them first and requested them to go back to their seats, but as the protest intensified, he ordered marshals to escort away protesting MPs from the House and there the high drama happened.

‘He should asked the question in the parliament as he is representing his constituency here and he does have responsibility for his voters, it’s clearly demming the great democratic traditions of this esteemed institution and it shows that he doesn’t have faith in our parliamentary democracy’, said BJP MP Jagdambika Pal.

T he Centre on Monday introduced the Special Protection Group (SPG) Bill, 2019, in Lok Sabha to change the law that will entitle only the Prime Minister to security services from the elite SPG personnel and former Prime Minister only for a year after he demits office.

Minister of State for Home G. Kishan Reddy introduced the Bill which seeks amendment to the Special Protection Group Act, 1988 which provides for the constitution and regulation of an armed force of the Union for providing “proximate security” to the Prime Minister and former Prime Ministers and members of their immediate families and for matters connected therewith.

Lok Sabha Speaker Om Birlainaugurated the 10th Commonwealth Youth Parliament at the Delhi Assembly on Monday, and said that global participants will get a chance to closely understand democracy in India.

Speaking at the inaugural session, Birla said, “The participants hailing from different countries will get an opportunity to understand the world’s largest democracy from their perspective.”

Finance Minister Nirmala Sitharaman on Monday introduced the Taxation Laws (Amendment) Bill, 2019, in the Lok Sabha to replace the Ordinance that was used to slash corporate tax rate to stimulate growth rate in a slowing economy.

Sitharaman introduced the Bill just before the proceedings in the Lok Sabha were adjourned for the day following opposition uproar over political developments in Maharashtra.