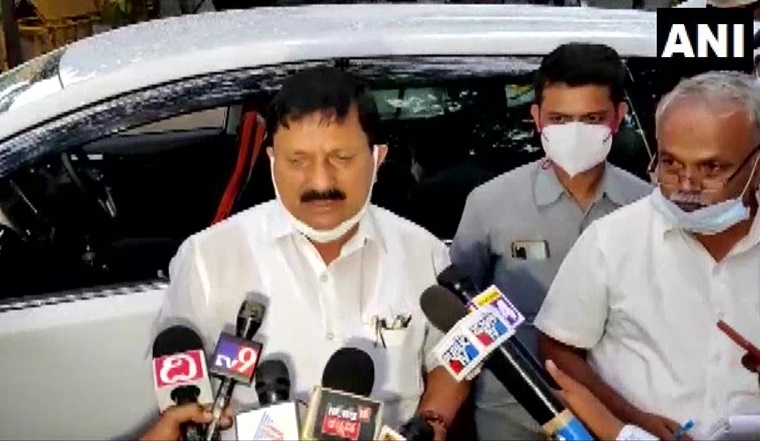 Bengaluru (Karnataka): After drawing criticism for his comments on Congress and the victim of the Mysuru rape case, Home Minister Araga Jnanendra on Friday clarified that "he had no intention to hurt anybody" while withdrawing his comments on the incident.

Addressing a press conference the Home Minister has said that, "I had withdrawn the statement made earlier on the Congress party leaders".

"We are committed to ensuring the safety of all sections in the society," he added.

Jnanendra further said that security measures will be tightened further to ensure the protection of all, especially women.

Referring to the Mysuru rape incident he said that Police officers investigating the case and culprits will be nabbed, he said.

The victim of the incident is being treated in the hospital and is still under medical care.

"A police investigation is underway to nab the culprits. The girl is under medical care at a hospital. Security will be tightened further to ensure the protection of all, especially women," Karnataka Home Minister Araga Jnanendra said.

Earlier on Friday, the Home Minister alleged that the Congress party was politicising the issue in order to gain political mileage and added, "The Congress is trying to rape me".

He further said that under Congress's regime, many similar incidents had taken place its regime as well.

Apart from criticising Congress, the Home Minister questioned the timing of the college student's visit to the deserted site on the outskirts of Mysuru where she was allegedly gang-raped by unidentified men.

"The rape happened there in Mysuru but Congress is trying to rape me, trying to rape the Home Minister. They are trying to gain political mileage in that incident. It was an inhuman incident. It happened somewhere, instead of telling us to detect the case, they are trying to gain political mileage, people are watching it, I have already given instructions to crack the case, we are working on it. We are working on it to send a message that such incidents should not happen," he had said on Thursday.

A girl student was allegedly gang-raped at Lalithadripura layout, Mysuru on August 24. As per the complaint, six men committed the crime and also beat up the girl's male friend.