'Nihang' member was arrested after he surrendered claiming responsibility for killing man, chopping off hands at farmers' protests site on Friday.

Earlier, a man was lynched, his hand chopped off and the body bearing over 10 wounds caused by sharp-edged weapons tied to a barricade at a farmers' protest site at Kundli near the Delhi-Haryana border, a gruesome incident being blamed on a group of Nihangs.

In a video clip on social media, some Nihangs are seen standing around the injured man with his severed left hand close to his head. The group is heard accusing him of desecrating a Sikh holy book.

The Samyukta Kisan Morcha (SKM), an umbrella body of farmer unions, said a group of Nihangs has claimed responsibility for the brutal killing after the man allegedly tried to desecrate the Sarbloh Granth.

Farmer leader Abhimanyu Kohar told PTI that the group was not part of the SKM's protests and urged strict action against the culprits. He claimed that the man was staying with the same Nihang group for some time.

The victim, Lakhbir Singh, a labourer from Cheema Khurd village in Punjab's Tarn Taran and aged around 35 years, police said.

His body was found tied to an overturned police barricade near a dais put up by the farmers protesting there for several months over the Centre agri-marketing laws.

"The Kundli police station received information at 5 am that a body was found near the farmers' protest site," a Sonipat police official said.

A Haryana police spokesperson said in Chandigarh that when Sonipat police reached the spot the man had died.

"Some people were standing there. When the police tried to take the body away, they protested. After some efforts, the body was brought to the civil hospital," the spokesperson said.

Singh was found wearing only a pair of shorts. His hand was cut off at the wrist and a foot bore deep injuries. Altogether, there were over 10 injury marks inflicted by sharp-edged weapons.

He was allegedly dragged by his assailants for a few metres before he was tied with ropes to the barricade. He is said to have bled to death.

"We have registered a case and further investigations are on," Additional Director General of Police, Rohtak Range, Sandeep Khirwar told PTI over the phone. Khirwar, who later visited Kundli, told reporters that police hoped to make arrests very soon.

"We have the names of some suspects and the investigations are on. I am hopeful that we should be able to make headway very soon, as we have some leads in the case," he said.

Back in Tarn Taran village, Lakhbir Singh's family was in shock and said he could never desecrate a holy book.

Some villagers told reporters that his parents died a few years ago and his wife and three children stayed with some relatives. Singh was said to be staying with his sister.

The Sonipat police said some people initially resisted their entry into the area where his body was strung to the barricade, and were not cooperating with them.

The video clip shows the Nihang group asking the man badly injured man where had he come from and who sent him to commit the "sacrilege".

He is heard pleading with the group in Punjabi.

One of the Nihangs says the man is a "Punjabi" and not an outsider, and it should not be made into a Hindu-Sikh issue. Another raises a religious chant.

The Nihangs are a Sikh order, distinguished by their blue robes and often seen carrying spears.

Last year, a Punjab policeman's hand was chopped off with a sword and six colleagues injured in an attack allegedly by a group of Nihangs at a village market in Patiala when the accused were asked to produce curfew passes.

The policeman's hand was later reattached after a surgery at the PGIMER in Chandigarh.

A case of murder has been registered at the Kundli police station in Sonipat against unidentified people, police said. A board of doctors conducted the post-mortem at the Sonipat civil hospital.

At least five video clips connected with the murder have surfaced on social media.

In a statement, the SKM said it wanted to make it clear that "both the parties to the incident, the Nihang group and the deceased person, have no relation with the Morcha.

The peaceful and democratic movement of the farmers is opposed to violence in any form, it added.

The SKM said it is against the desecration of any religious text or symbol, but that does not give anyone the right to take the law into their own hands.

"A Nihang group at the scene has claimed responsibility, saying the incident took place because of the deceased's attempt to commit sacrilege with regard to the Sarbloh Granth," the farmers' body said.

It demanded that the culprits be punished in accordance with law after investigating the allegation of murder and conspiracy behind sacrilege.

"As always, the Samyukta Kisan Morcha will cooperate with the police and the administration in any lawful action," it added. 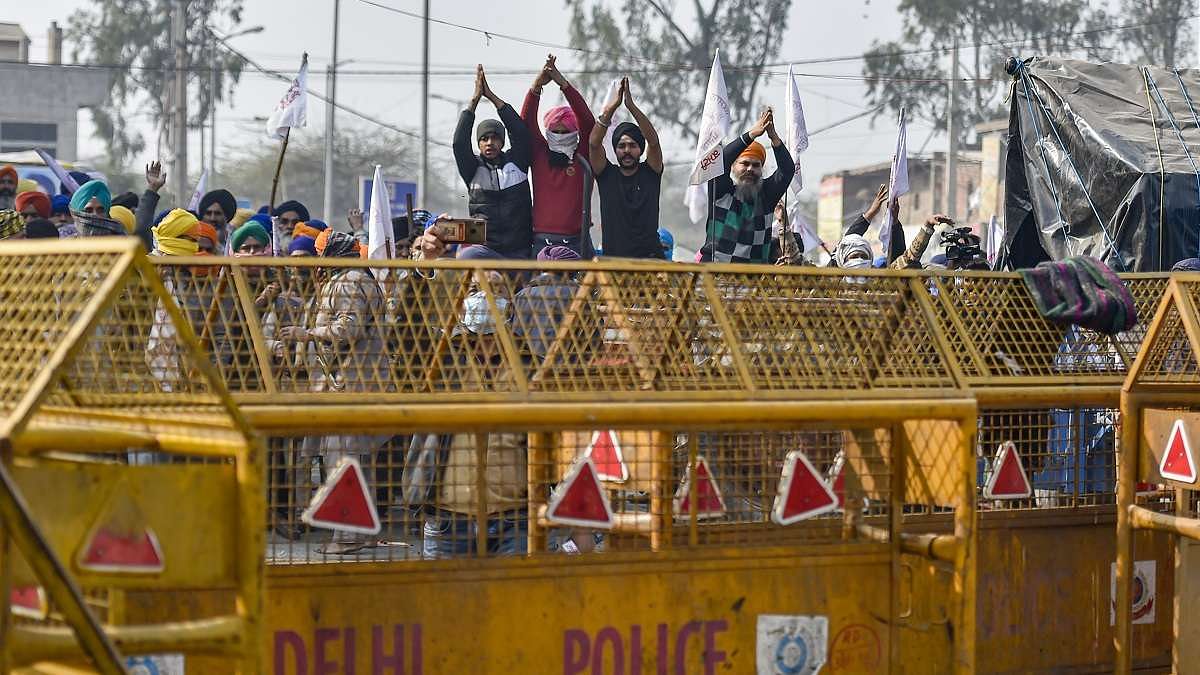