National Herald: ‘I will not budge an inch’: Rahul Gandhi 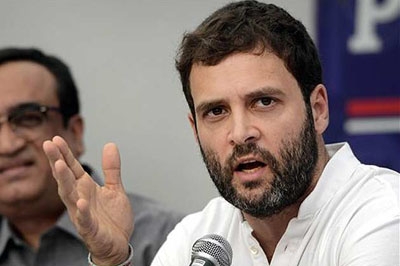 “Let them do what they want. They can do whatever they want to. I am not going to budge one inch. The same questions I am asking the Prime Minister (Modi) or the government, I am going to continue asking them,” Rahul told reporters here. The Congress Vice-President charged the BJP with adopting ‘vendetta politics’, while responding to the case involving him, his mother and Congress President Sonia Gandhi and others. His job as an opposition party member was to question the government, he said, adding, he was “not afraid” of these things. Earlier, at Cuddalore, he accused the BJP of resorting to “political vendetta,” on a day when a magistrate court in Delhi exempted him and Sonia Gandhi from personal appearance today in the case.

It had however directed them to be present before it on December 19. “Well I absolutely see a political vendetta. This is the way the Central government functions, the way they think,” Rahul, who was in Cuddalore to distribute aid to flood-hit people, said, showing a similar combative attitude adopted by his mother.

Invoking the legacy of former Prime Minister Indira Gandhi and her mother-in-law, Sonia Gandhi had asserted that she was not scared of anyone.

Rahul also vowed to keep up the pressure on the NDA government. While Rahul initially said that he will react on the issue after returning to Delhi where Parliament is in session, he, however, later said there was “political vendetta” on the issue while responding to repeated queries from reporters.