National Herald: Government hits out at Congress for parl ruckus 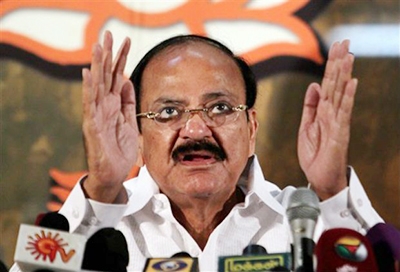 New Delhi: The government on Tuesday hit out at the Congress after the opposition party disrupted proceedings in both the houses of parliament to protest the National Herald case. “We don’t understand what has suddenly happened to the Congress? They are not letting the house function. It is undemocratic, unethical. The government has nothing to do with the case,” Parliamentary Affairs Minister M. Venkaiah Naidu told reporters outside parliament complex.

“The government is working according to the constitution, so nobody needs to fear,” he added. Minister of State of Parliamentary Affairs Mukhtar Abbas Naqvi also accused the Congress of politicising the National Herald newspaper case.

“The Congress has no issue to debate in parliament. Therefore, it is unnecessarily creating a ruckus. Congress ke iss vyavahaar se lagta hai daal me kuchh na kuchh nahi, balki poori daal hi kaali hai (it seem from the Congress behaviour that the whole matter is fishy),” he told reporters here.

The minister said it was up to court to decide who was guilty and who was innocent. “The court is performing its duty and nobody needs to fear,” Naqvi added. The Congress on Tuesday created ruckus in both houses over the National Herald case, accusing the government of “political vendetta” against the opposition. Repeated adjournments were witnessed in both houses till 3 p.m. on the issue.