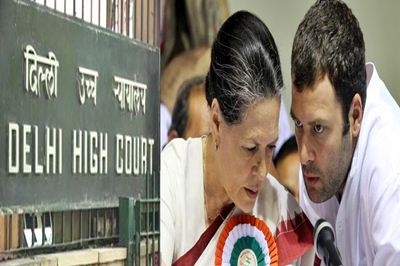 New Delhi: Congress President Sonia Gandhi, her son Rahul Gandhi and others were today directed to appear in person on December 19 by a Delhi court which allowed their plea seeking exemption from personal appearance for the day in the National Herald case.

Senior advocates Abhishek Manu Singhvi, Harin Raval and Ramesh Gupta appeared for the Gandhis and other accused and moved separate pleas seeking exemption from personal apperance for their clients for today only.

“We are very keen to come before the court,” Singhvi told Metropolitan Magistrate Lovleen, adding, “Please give us a date of your choice and that of the convenience of Dr Subramanian Swamy.”

Swamy, who has filed the case, however, told the court that there are seven accused in the case and today’s date was fixed in September itself. “Accused number 2 (Rahul Gandhi) has left for Chennai this morning,” he said.

The magistrate, however, told the defence counsel to ensure that all the accused appear before the court on the next date of hearing on December 19.

“Make sure that all the accused appear on December 19. I am giving exemption from personal appearance only for today. Don’t come in the morning on December 19. You come at 3 PM,” the magistrate said.

During the brief hearing in the jam-packed courtroom ,the court said, “Is the judgement of the (Delhi) High Court on the net? Can I see it.”

Responding to the court’s query, Swamy placed a copy of the verdict of the high court delivered yesterday before the court.

During the hearing, senior counsel Ramesh Gupta told the magistrate that accused Sam Pitroda is presently in the United States and they will try their best that he appears before the court on December 19.

To this, the court asked them to ensure that all the accused appear before it on December 19.

Rahul Gandhi today left for a visit to flood-affected areas of Chennai and its suburbs and Puducherry. Gandhi would first visit Puducherry and later Cuddalore and Chennai during the day-long visit.

The Delhi High Court had yesterday rejected the pleas of Gandhis and others for quashing of the summons against them in the case and also turned down their pleas for exemption from personal appearance in the trial court.

Along with the Gandhis, five other accused — Suman Dubey, Moti Lal Vohra, Oscar Fernandez, Sam Pitroda and Young India Ltd — had challenged the summons issued to them by a trial court on a complaint by Swamy against them for alleged cheating and misappropriation of funds in taking control of the now-defunct daily.

The trial court had on June 26, last year summoned all the above accused to appear before it on August 7, 2014 on Swamy’s complaint.

The Congress leaders had, thereafter, on July 30, 2014, moved the high court which had stayed the summons on August 6, last year.

Thereafter, on December 15, 2014, the court had further stayed the summons till final disposal of the petitions.