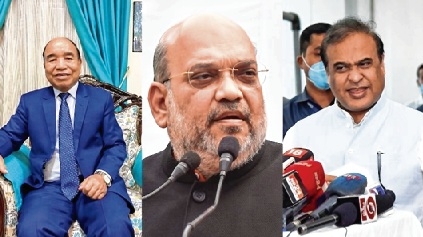 During the phone call, it was decided to resolve the border issue amicably through meaningful dialogue, Zoramthanga said.

“As per telephonic discussion with Union Home Minister and Assam Chief Minister, we agreed to resolve the Mizoram-Assam border issue amicably through meaningful dialogue,” he tweeted.

Zoramthanga also urged the people of Mizoram to refrain from posting provocative messages and misuse of social media in order to de-escalate the ongoing tension.

“In the meantime, in order to prevent any possible escalation of the situation, I request the people of Mizoram to avoid posting sensitive messages and make judicious use of social media platform,” he said.

New Delhi: The Centre has decided to demarcate boundaries of the Northeastern states through satellite imaging to settle interstate border disputes often becoming a cause for concern and sometimes even leading to violence. Two senior government functionaries said the task has been given to the North Eastern Space Application Centre (NESAC), a joint initiative of the Department of Space (DoS) and the North Eastern Council (NEC).

The NESAC helps augment the developmental process in the Northeast region by providing advanced space technology support. The idea for demarcation of interstate boundaries through satellite imaging was mooted by Union Home Minister Amit Shah a few months ago.

Shah had suggested roping in NESAC for mapping the inter-state borders and forests in the Northeastern region and coming up with a scientific demarcation of boundaries between states. The Shillong-based NESAC is already using space technology for flood management in the region. Since there will be scientific methods in the demarcation of borders, there will no scope for any discrepancy and there shall be better acceptability of the boundary solutions by the states, the government functionaries said.

Mizoram CM Zoramthanga said, “The Assam government is making lame excuse, clai­m­ing illegal, drugs trafficking and cattle smuggl­ing. Their logic does not hold water.” “This should not become another Berlin. We want the central government to intervene on the blockade issue.” Referring to July 26 clashes, he claimed Assam Police lathicharged and used tear gas at locals from Mizoram who came to protest agai­nst them. An SP of Mizoram Police barely escap­ed from the firing coming from the Assam side.

Assam govt has decided to move the SC within 15 days to resolve the interstate boundary dispute with Mizoram amicably. The develop­ment comes at a time when tensions have been runn­ing high along the Assam-Mizoram border. Addr­ess­ing the media in Guwahati on Sunday, CM Himanta Biswa Sarma said his government has de­cided to move the SC to seek an amicable reso­lution to the boundary dispute with Mizo­ram. “If we are wrong then the Supreme Court will say you are wrong, if we are right, the SC will say you are right. So why we should fight among ourselves.”