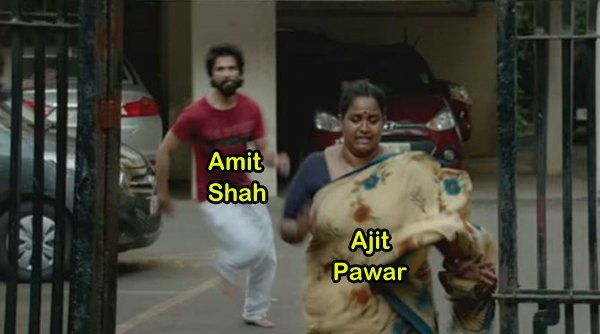 It had been nigh on a month since the Maharashtra government formation saga began. And matters might be coming to a head soon.

Social media doesn't quite know what to make of the ever-developing situations and some hilarious messages have emerged.

Sanjay Raut, Shiv Sena: Ajit dada has resigned and he is with us. Uddhav Thackeray will be the Chief Minister of #Maharashtra for 5 years. pic.twitter.com/7Qyz169Ivh

Just amazing - the games and countergames, play and #PawarPlay, the cloaks and daggers, buses and gold, winners and losers and talk of bought and sold - the #MaharashtraCrisis brought to the fore.

#AjitPawar resigns as the Maharashtra deputy chief minister in the #DevendraFadnavis government.

Godi media spin will be:

With this 4-day tamasha, the BJP has inadvertently made the khichdi coalition look united, galvanised & focused. The perceived power-grab has softened the glaring contradictions between the Sena-Congress-NCP. It has helped the opportunitists look like they have a cause. Simple.

Assuming this sordid chapter is over and there is no new twist, Pawar has pulled a fast one over the BJP. The latter will, during the re-election, be reminded of their appropriation of the corrupt. With what face can the BJP now criticise the NCP - its policies & practices? WDTT https://t.co/MFkShNUo2t

Sanjay Raut is dusting off dirt from the Shero Shayari kitaab he had kept away since last few days. 😹🙏

Maharashtra events might prove to be 1967 Moment in new age politics. It sends strong signal if opposition parties can be united then BJP can be defeated. Similar to Anti-Congress-ism, Anti-BJP-ism can stay. #MaharashtraPoliticalDrama #MaharashtraCrisis #MahaMLAParade