The higher percentage for the fishing belt should send jitters to the ruling front, which has struggled to defend the series of MoUs signed in connection with the scheme to throw open deep sea fishing to an American company owned by Keralites with low credibility

Kerala CM Pinarayi Vijayan casts his vote in Kannur. | ANI
Follow us on

Thiruvananthapuram: Kerala voters ignored the new threat of a new wave of Covid infection and turned up at the polling booths to exercise their franchise with a vengeance. The voting percentage on closure was 73.58, more or less the same as the previous election, but in some of the sensitive zones, such as the coastal belt, where the government’s alleged deep sea deal has caused heartburns, the turnout exceeded previous levels.

The higher percentage for the fishing belt should send jitters to the ruling front, which has struggled to defend the series of MoUs signed in connection with the scheme to throw open deep sea fishing to an American company owned by Keralites with low credibility.

Also, noteworthy is the record polling in Kasargod’s Manjeshwaram, where state BJP chief K Surendran is trying his luck after having lost the seat by 89 votes in the 2016 election.

But what came as the biggest surprise, probably with a major bearing on the election results, was how Sabarimala and Lord Ayyppa appeared from nowhere and dominated the day’s proceedings. It was not clear whether anyone had planned such a turn.

It began with a remark by Sukumaran Nair, general secretary of Nair Service Society (NSS) in the forefront of defending the traditions and rituals of Sabarimala, that the Ayyappa devotees desire a change of government as their concerns remain unresolved.

Either provoked by the impropriety of raising such an issue on the polling day, or sensing the damage it can cause to the ruling front’s prospects, Chief Minister Pinarayi Vijayan declared that Ayyappa and all other gods endorse the state government as it has protected the people.

The uncharacteristic response from the chief minister, who has been taking great care to skirt the Sabarimala issue throughout the campaign, was the signal for the opposition to exploit the highly sensitive issue on the most crucial day.

Opposition leader Ramesh Chennithala claimed that the non-believer chief minister’s invocation of Ayyappa was in penance for what he and his government did to Sabarimala, but he cannot escape the wrath of the gods and the worshipers, whose feelings were deeply hurt by the government-sponsored attempts to smuggle activist women to the hill shrine, accompanied by armed security personnel.

Former chief minister Oommen Chandy asserted that Vijayan’s remorse will not satisfy the deity and his devotees and challenged to withdraw the state government’s affidavit in the Supreme Court favouring the entry of women of reproductive age to the hill shrine.

BJP state BJP chief Surendran claimed that Vijayan’s retraction was prompted by the fear of defeat for the government in the election, but that is going to be no avail as Lord Ayyappa will not let him go scot-free.

As voting progressed in the 140 constituencies, Sabarimala appeared to be the only narrative that held the day, which according to observers, may not be a reassuring thought for the ruling front, which had suffered a complete rout in the Lok Sabha elections, held in the aftermath of the Sabarimala agitation. 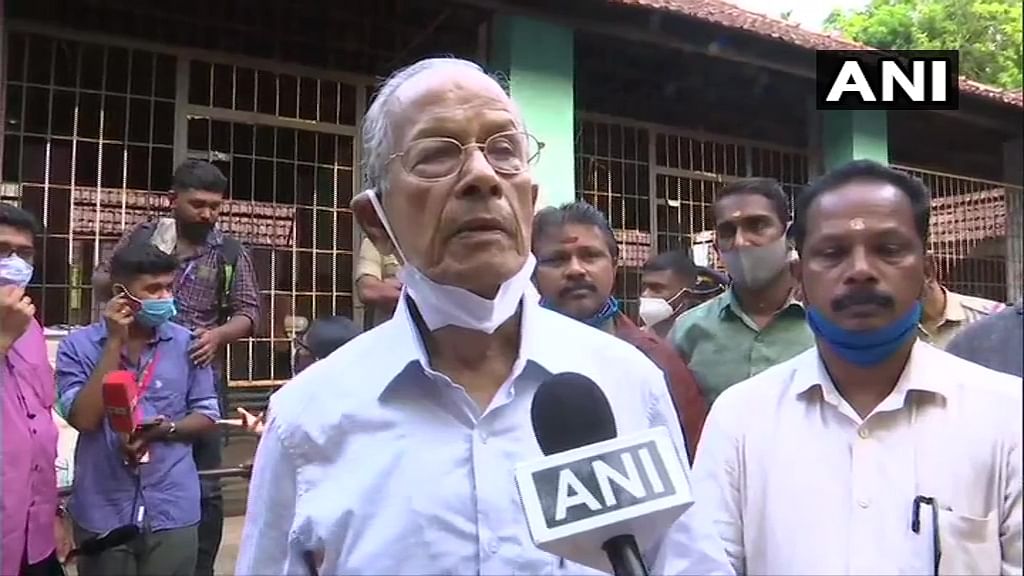