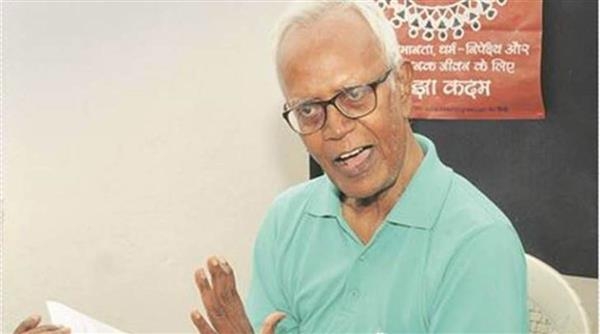 A college named - St Aloysius College in Mangaluru has postponed its decision to name a park in its Beeri campus on the outskirts of the city after tribal rights activist - late Father Stan Swamy. This comes after Hindu right-wing outfits, including the Vishva Hindu Parishad (VHP), Bajrang Dal and ABVP, staged their protest against the same.

According to a India Today report, Hindu right-wing organisations in the city held a press conference during which they said they will not allow the park to be named after tribal rights activist Stan Swamy. They said that he had been arrested under the Unlawful Activities (Prevention) Act and had been facing serious charges for his alleged role in the Bhima Koregaon violence.

The tribal activist who was undergoing treatment at the Holy Family hospital in Mumbai passed away in July this year.

At their press conference, VHP leader Sharan Pumpwell claimed that Stan Swamy was a naxal, and hence, the VHP was opposing and condemning the decision taken by the college authorities.

The right-wing groups said that an old institution like St Aloysius College, which has contributed immensely to the field of education, naming a park after a person like Stan Swamy is akin to it indirectly challenging national unity. Such a development has “shocked education-lovers and peace-loving people,” they said.

Earlier, the college management had decided to hold the naming ceremony on October 7. However, it was initially postponed in view of President Ram Nath Kovind’s two-day visit to the city.

But now, following the right-wing groups’ protest, college rector Father Melwin Pinto told India Today that the institute will have to reconsider its decision.

“We do not believe in their threats and ignore them. Father Stan Swamy was a great individual. I knew him personally. I have studied under him and know that he was not a man of violence. I call him a patriot,’ Melwin Pinto said.