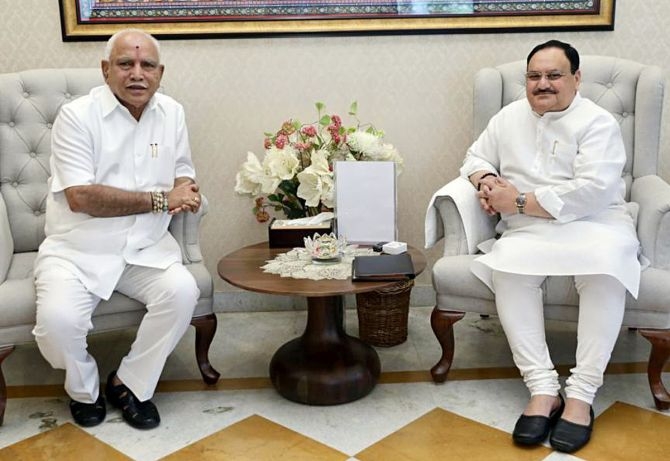 Amid heightened speculation about a change of guard in Karnataka, Bharatiya Janata Party (BJP) chief JP Nadda on Sunday ruled out any crisis and said Chief Minister BS Yediyurappa has done good work.

"Yediyurappa has done good work. Karnataka is doing well. Yediyurappa is taking care of the things in his own way," news agency PTI quoted Nadda as saying.

When asked if there is a leadership crisis in the southern state, Nadda said, "That is what you feel. We don't feel so".

Nadda's remarks assume significance as they came hours after the Karnataka CM said he will take an appropriate decision, once he receives directions from the BJP high command this evening, regarding his continuation in the post.

"By evening once it comes, you will also get to know about it, once it comes I will take an appropriate decision," Yediyurappa said in Belagavi in response to a question whether the directions from the party high command in Delhi were expected today.

Earlier on Friday, Yediyurappa had said that he would abide by the party high-command's decision whether to remain as Chief Minister or to quit. "Our party leaders will inform me on Sunday (July 25) evening and I will follow their diktat on Monday, (July 26), as I will be completing two years in the office," he had stated.

The speculations had intensified after the 78-year-old Lingayat strongman went to the national capital to meet Prime Minister Narendra Modi and the other top leaders of the Bharatiya Janata Party (BJP) last week. Yediyurappa's trip had raised questions in some quarters, with reports suggesting that the party is now working out a succession plan. Reports even said that in his meeting with PM Modi, Yediyurappa had offered to quit citing his health. However, he later dismissed the speculations and said, "There is no truth in the rumour."

Meanwhile, according to an IANS report, the BJP top brass is contemplating to recommend the incumbent National General Secretary (Organisation) of the party BL Santhosh as the successor of Karnataka Chief Minister B.S. Yediyurappa. According to top-level BJP functionaries in New Delhi, apart from Santhosh, the top brass is also mulling over four Deputy Chief Ministers retaining Laxman Suvadi, who belongs to the Lingayat community, which is one of the biggest in Karnataka comprising nearly 15 per cent of the state's population, the report added.